Picked up a pair of puch maxis recently, both off the road for 5++ years. Haven't had a moped in awhile (3 or 4 years), but seemed like a fun and cheap project for the winter.

The forks on the first were shot completely, so instead of buying a new set of the crumby puch ones, or the $$$ upgrades, I installed the forks from a 1974 Honda CB125s that I had bought for some engine parts, put new fork seals on them, rebuilt the front mechanical disc brake, and installed them. Required about 10mm of spacing on the triple tree. I also put the CB rear shocks on, though I need to make some better bushings. They only dropped the swingarm by a few mm, whereas the forks were a few cm longer, so it has a little bit of an upright, 80's UJM look. Figuring that a beefy moped should be used for adventure, I installed some ammo cans, reupholstered the ripped seat with waterproof canvas, which I had around for making bicycle panniers last year and made a tank bag (with an old bicycle cruiser tube at the top). Was thinking of installing a couple PVC fishing rod holders in back next.

With the increased height, the puch center stand doesn't reach the ground. I think when its a little warmer, I'll cut and weld an extra inch into it.

Still haven't wired it up. I'm thinking two systems - the moped one for the coil and a 12V one with a battery in the ammo can (or two) for the headlight, taillight, blinkers, and horn. I guess I'll have to make the 12V one not grounded (since the motor one will be grounded), but the circuits will be simple. I've got lots of switches, courtesy of the CB handlebars.

Would love to upgrade the engine/pipe/ignition, but not sure I can justify the expense (haven't had to buy anything new besides the fork seals - $6, cheap ebay universal blinkers -$15, ebay brake levers - $8, and a new petcock, $15 and I need to get a headlight). Maybe once I see how it rides, too cold for riding now here, but next week maybe... I have a knobby tire for the front, need to get one for the back.

Its a heavy bike, but I'm pretty skinny (150), so I think it should be able to handle it and it'll be nice for the dirt road that I live on - better than the stock forks, I'd imagine. Once I load fishing/camping stuff on, it'll probably be pretty slow, but that's alright.

I'm terrible at project photos or build threads (started a couple on a motorcycle forum, finished the projects without taking a single photo), but will try to be better.

Any thoughts from moped folks would be appreciated. I had a stock, terribly rusty maxi awhile back that I rode for a year or so, but I don't have a whole lot of moped experience.

Looks cool, making a bike for fishing trips is something i would also like to do someday.

Upgrading the engine doesn't have to be that expensive, a good exhaust and a 14/15 mm carb can easily give you good improvements.

Its a weird one. Its a 50's or 60's Japanese Phillips/Raleigh ripoff (the rod brakes are Phillips-type), but pretty sure its homemade into a tandem (front triangle has good brazing, rear has some good brazing, also some bad welding). Unfortunately, the rear seat tube is stress cracked, so its not really rideable. Rear brake is a band brake, but missing and of some old measurement so newer band brakes don't work on it.

Its a nice-looking bike though.

Its going. Slow and heavy, but handled nicely (if a bit heavy) both on and off road. One of the fork seals is leaking a little, maybe not seated well, but I'll tear it down again and paint it before I declare it done. Need to get a better 12V battery pack for the supplementary stuff (the Puch horn is less wimpy at 12V!).

Haven't done any real tuning, so I'm sure when I re-jet it for the foam filter it will open up a little bit. Should be a nice little backroad ride - need to mount some PVC rod holders. Can still lift it into my truck pretty easily.

Nice little project for a <$300 moped and some spare parts lying around from a parts bike.

You might try a Seal Mate on that leaking fork seal . 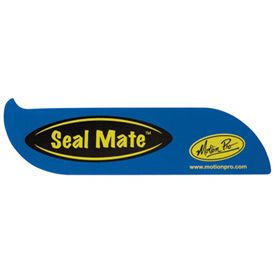 I cut mine out of a gallon milk jug . Seems to work pretty good . ;)

The milk jug is a good idea, I'll give that a try, though I made sure to have it pretty damn clean. I've gotta pull the leg out and recheck it. The leg was pitted farther up, so it might be that when it gets close to bottoming out, a pit gets in the seal, in which case I think I'll add a ~5mm spacer to keep the spring under more compression and keep it away from the top. There were originally these two plastic tubes that slotted between the top of the spring and the fork and pushed the top of the spring a couple mm below the bottom clamp of the triple tree. They were destroyed and rather expensive to replace (~$50), so I know that the fork isn't under quite as much compression at rest as before; also, the moped weighs less. So its overall probably a bit bouncier than it was on the cb.

You might also consider running a heavier weight oil in the forks to slow damping . That cuts way down on the bounce .

I'm an easy rider for the most part , breaking trail off road and always when on the street . Gives me a touch more time to make corrections . ;)

Depending on how picky you want to be , the pits can be repaired with a bit of epoxy resin .

Smooth the area to original surface and clean with brake cleaner . Apply a thin coat of resin , let cure and sand , leaving the pits filled .

I’m a fan of this build. CB forks look great on it!