I've always pondered putting a tomos top end on an e50, but i've always put myself off to it by the thought of having to chop an exhaust to angle. Not that i can't weld, i just dont have pipes to spare that would make it worthwhile.

Show me yours! Videos would be neat too.

For that matter, ANY top end swaps would be cool! It'd be interesting to see a moby/minarelli/honda/vespa/tomos/puch/derbi etc. top end swapped to another bottom end, and whatever spacing or cutting was required. Just cuz. (edited)

I built one of these e50 engine with treat kit on a cheep budget with a 21 mm carburetor, just kickstart springs in a stock clutch and modded estroil pipe for Nick D who raced it, he came in third in the finals of a moped race and completed all his heat races,

He rode the bike around for months before he sold it !

It was a freak, the bike did near 60 mph pretty much all day long with no overheating, running points (but detailed perfect so there was no bounce of points) and timing set at 17°

Best bang for the buck even though you have to dick around with finding or making a correct intake for a 4pedal reed cage (I recommend the Polini with the rubberized 4 petal true reed, it’s just that little bit better than malosi 4 petal though more costly

> case and kit a lot

> estroil pipe for Nick D who raced it, he came in third in the finals of

> a moped race and completed all his heat races,

> He rode the bike around for months before he sold it !

> It was a freak, the bike did near 60 mph pretty much all day long with

> no overheating, running points (but detailed perfect so there was no

But the purpose of the thread was to see some cool and totally unnecessary top end swaps. for no real reason other than i was bored. I just like seeing whacky moped stuff. A moby top end on a derbi bottom end, having taken care of their differences in stroke, stud spacing, and connecting rod diameter, would be a cool thing to see, despite it being absolutely ridiculous.

THATS what i wanna see. Or pretty much anything out of the ordinary.

And before the Internet/well before I made a profile on moped army to sell parts I had bins of engines, frames and all kinds of parts, you name it so

rarely do I have to ever have to miss matched anything but occasionally I leave something Janked just for the heck of it to see how long it lasts.

Linky to my Garage of the buid

Another linky to the Garage page for my Maxi build

no pics but i had a pinto with an a35, 14 bing, and a tecno boss. Ran to 41 with ok torque. Only bad thing is that it vibrated like a mother fucker. Didn't really bug me when riding but i had to tighten intake/head bolts after pretty much every ride... no amount of loctite or washers could help.

> Linky to my Garage of the buid

> Another linky to the Garage page for my Maxi build

> > Linky to my Garage of the buid

> > Another linky to the Garage page for my Maxi build

That was 17x45, and had decent take off, after I hit my 50mph goal I re-geared to 15x45 and it does low 40’s with great torque, it mostly gets ridden in our downtown area, so take off is more important then top end around here (edited)

Yea the treats reed kit with a 4 petal is the shit. Absolutely the easiest kit to just go rip up the road.

I think you can machine the stock Tomos cylinder exhaust port flat & you use the stock Puch exhaust mounting holes. ( mlm make an adapter spacer for maxi a Magnum exhaust)

How does it run compared to a Stock a55 ?

2017 A55 cylinder and head. Ported for reeds by a rabbity dude. MLM reed block that I won at a rally with single petal reed that came with a Polini kit. Tomos a35 straight shot 15mm intake with the stock a55 carb (phva 14.12). Estoril sidebleed. On a kick e50. Geared at like 15/35 if I recall. Rips little dicks but it climbs hills ok so I am happy with it. Barely hits 300 degrees even in Cali summer.

> Polini kit. Tomos a35 straight shot 15mm intake with the stock a55 carb

> I recall. Rips little dicks but it climbs hills ok so I am happy with

> it. Barely hits 300 degrees even in Cali summer. 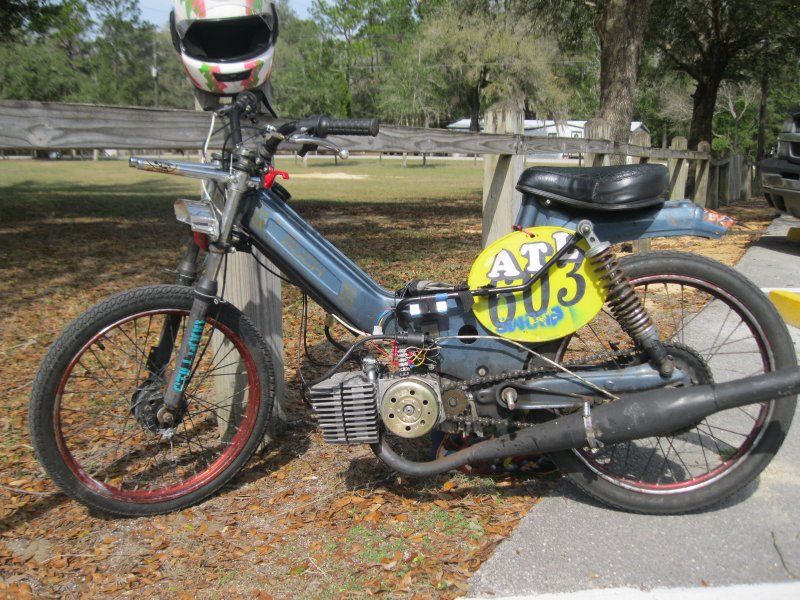 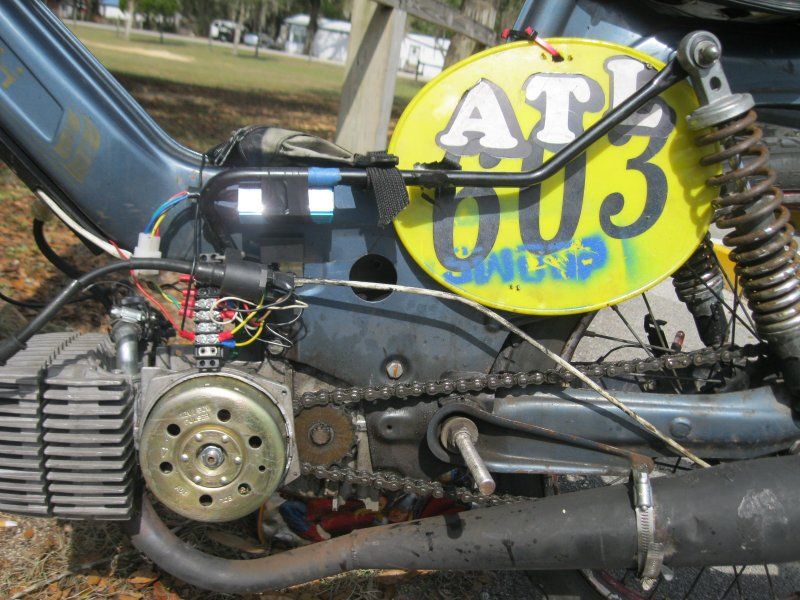 This is the first kitted bike I ever put together and tuned, many years ago, though at the time it wasn't mine. Used to belong to Clint "Monstro" swoop, it had an athena that lasted a good 3 years before catching a ring and becoming totaled. I revived it about a year later as a last minute ride for Hot n' Peddy FUCKING RALLY with a cheapo kstar, and in that state it got passed on to Kevin Swoop. It got scavenged hard for parts after dying and kevin's reluctance to fix it up. I finally got time to rebuild an old engine and port up an a55 for it. $0 invested it ran fucking great. rebuilt cheapo CDI w/ Universal "race" box a55 topend ported to 175 deg exhaust, widened & ovalled about 2mm each side. 25 blowdown 150 intake. piston matched & modded, transfers cleaned matched and opened, intake opening to 17mm, header intake with 17 Amal, Casematched to e50 bottom end, 16deg BTDC timing, 17/45 gearing. I drilled out the clutch bell, starter plate, and arms myself on a cheap drill press. About 42g off the bell, 36 off the starter. Tuned the clutch (2 shoe, KS spring) took 10g off each arm and ~2 turns out from tight. Blaster pipe pulled hard above 6-7000 rpm, absolutely the best topend pipe. it was all rpm but clutch felt awesome. it was great. 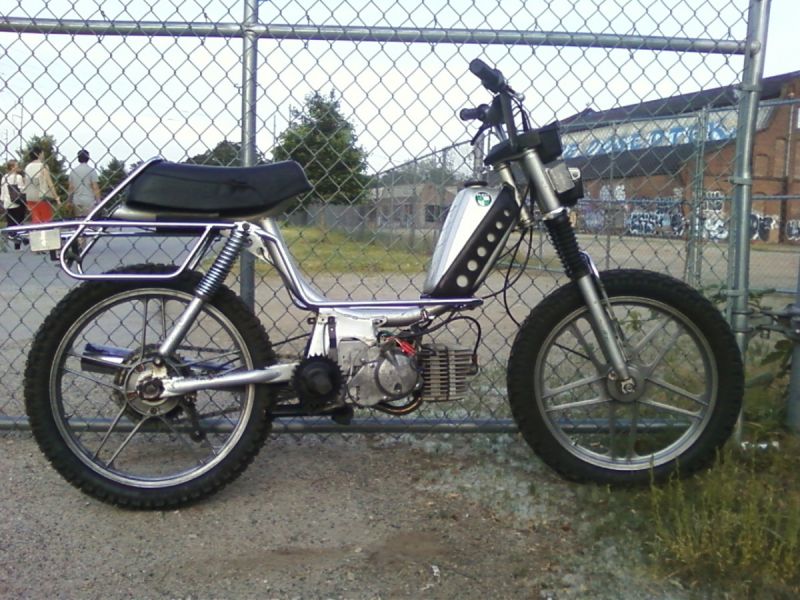 That was some cases that were already matched to a big fin airsal 72 kit, so pretty close to the a55 already. I pretty much slapped it on. stockish pipe and 12 bing carb so it never ran super quick but it worked. around 30mph. My favorite part though I swapped the retaining pin for the bing slide to the other side, which lets you reverse the slide direction to run the bing backwards... no real advantage but you can hose clamp it and you can avoid all the annoying issues of bings airleaking at the base of the clamps. 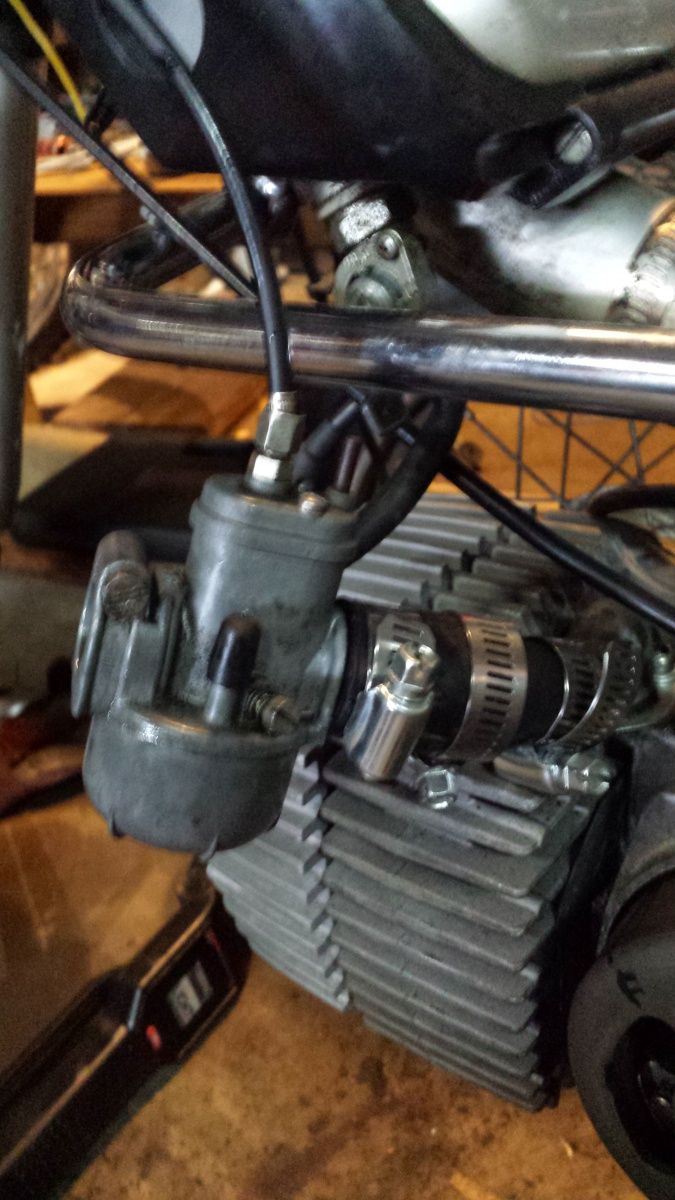 traded it to Charlie for actually one of our old raffle bikes that he'd won. I think he polini'd it up. (edited)

That bing fix is friggin clever!