Micah of Clintonville Ohio is at it again, spreading lies about Jeff Peyton of the UnOfficials. Most of us know Jeff and he is an upstanding valuable person in the moped community. Micah's slander is getting out of control. Let MA get together and do what is possible to get rid of this pestilence!

I felt cheated and over charged for a gas tank cleaning. $300 for a rinse w a garden hose. It seemed like to me Jeff Peyton treated me unfairly and was short tempered and pompous. Another defeated customer, the unohfficials is his supreme gang. I would not recommend nor return. I thought he would be professional but turned out to act arrogantly. Hesitated to write this. There's a handful of knowledgible, honest, fair, moped guys in columbus. Jeff is not one of them, he's shown me to be vindictive, vengeful, hateful and not as knowledgeable as he claims. What goes around comes around, Jeff. You're a wolf in sheeps clothing. The moped community in Columbus that has felt your wrath, is ashamed of you

Here is his original posting will most likely be flagged soon, but he keeps re-posting.

Butt seriously internet moped slander sucks all around and I think Jeff has done a a great job defending RTS.

“Let MA get together and do what is possible to get rid of this pestilence.”

I mean, if you guys can’t handle it locally what exactly are you proposing we do about it here??

Typically 3 sides to every story

(yours, theirs, and reality)... so like I tell the kids, y’all need to work that shit out.

This is why we fix our own stuff !

> has done a a great job defending RTS.

> I mean, if you guys can’t handle it locally what exactly are you

> proposing we do about it here??

> Typically 3 sides to every story

> work that shit out.

Yep^^^. Shop time is expensive. If your not doing it yourself you’ll put more money in a bike then it is worth quickly.

Take it up with them locally face to face and have him take that dumb post down.

Yup. And when I don't, I don't complain about labor prices. Instead, I do everything I can to reduce the amount of labor time.

Lot of prepubescent drama coming out of the ole c-bus region......This thread is no exception....Cut your losses, and move on. No matter how well you read a persons character, once that wallet opens theres still a 50% chance you're getting screwed. Do your own work. If you can't fix it either through lack of equipment, desire, and or knowledge. Respectfully recoup what you can. Then pitch it or give it away, and avoid mopeds in the future.....I've met some great moped people that I wouldn't trust with a nut, and a bolt. With that being said, Ive met some real doozies I wouldn't piss on, if they were on fire.....yin, and yang baby......wow.....My 2 cents....

> You're a wolf in sheeps clothing.

> The moped community in Columbus that has felt your wrath, is ashamed of you

> > You're a wolf in sheeps clothing.

> > The moped community in Columbus that has felt your wrath, is ashamed

micah is a fucking moron. it took me like 1 month of being in ohio, not even the same part of ohio to be like, nah, that dude's fucked

Ya, if you cant work on your own bikes, then you shouldnt be in mopeds

That said Jeff is a super good guy

Also C-Bus is a seaaaa of drama all the time, you guys need to come up to Toledo and just chill the fuck out

Way to go Ken! Bring more drama to Moped Army! That was Bigly of you!

i don't think that micah wrote the original cl post. i've talked to him in the past. the cl post contains no profanity and nothing racist, sexist or homophobic. its not micah imo.

telling people that if they can't fix mopeds they shouldn't have mopeds is just stupid. thats like saying you shouldn't own a house bc you can't re-roof it. everyone who owns and rides contributes something to the group whether they have wrenching ability or not.

as far as jeff payton and river2strokes is concerned, he's the best thing to hit columbus since handybikes closed. by morphing the old bob jones gang into the unohfficials there are now actual weekly rides as an established group and we had 2 rallies.

hehehe....close the window you're lettin stank out.........Remember kids any hobby you share with folks. Some are there to build you up as others are there to tear you down. Surround yourself with good people. Strength, courage, honor, humility, compassion, sacrifice, wisdom, to name few.....This thread is as counter productive as what is happening publicly on CL in C-bus...On the other hand, I did pick up a nice murray runner a week, and a half ago in Heath for a $150.....The guy had a 15yr old son, and for the life of me I couldn't figure out why he wanted to get rid of it, but what do I care I've got something to keep me busy until the next one comes along...my 2 cents

This is the most petty shit I’ve ever seen.

> Ya, if you cant work on your own bikes, then you shouldn't be in mopeds

the postings linked and this entire thread... weak.

Yeah all his posts on craigslist completely destroy the worth of mopeds ! he ruined craigslist Ohio, no one knows what’s the charge for a moped because his stupid posts (edited)

little something for all the micah fans

This guy charged my 78 year old Granny $300 to clean her gas tank on her moped, and it appears all he did was use the same garden hose i would have used. Shes just one lerson thats dealt w hin abd got stung i knkw several orhers say the same thing. Youre a real garageTroll even looks like on

I think he does shoddy work. He seems hateful and vindictive. He told granny he didnt work and hus wife carries him and their kid so she felt bad. I dont get it he acts lume he loves mopeds abd knows everything rhen he sticks a knife in the back of Granma who is on a fixed income and can only drive her moped to the store and appointments. Typical mechanic slimeball. Hes my neighbor in lroximity only. I think he might even hsbe stolen my buddies eagle moped i wouldnt put it past him basef on his antics thst i saw. Hes in a moped gang. Hes insexure and set in hus superiority complex. Hes also apparently screwed over a couple if my buddies i think he has a screw loose. Dont support that kind of shoddy hobby business. In the end the snake in fhe grass is rhe last one to get bit

Jeff when you Plant shit seeds, you get shit weeds

> little something for all the micah fans

The spelling hurts my brain.

I hope that isn't his FS1E, and are those Derbi wheels? 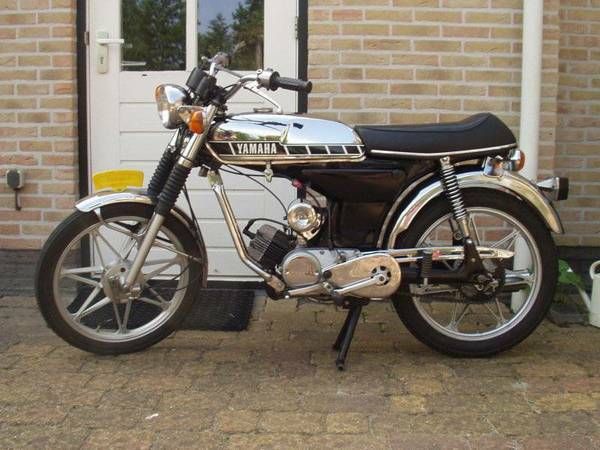 Not sure what MA can do to "get rid of this pestilence." Call an exterminator?

Not sure what Micah did to piss people off other than advertise mopeds at outrageous prices but I guess he has every right to do that and you have every right to be offended.

The guy's a con. He's not deluded, he's trying to take advantage of people. It's different from some guy finding an old moped and seeing dollar signs and posting it for an outrageous price. This kid knows what these bikes are worth and is fishing for suckers. There are dreamers and there are crooks and he's the latter.

It doesn't affect me directly so meh, I read the posts here and get a laugh. But for people in the area they have the right to be upset and the duty to make it difficult for this guy to operate.