I’m over in Australia, and recently imported a Motocompo folding scooter from Japan, as I’ve always wanted one to go with my Honda City Turbo II. She’s in pretty good shape, though required a complete clean of the Keihin carb before she would work again. I’ve had her running up and down my street at a whopping speed of 38km/h (~23mph), haha. (This is on a tiny 8” tyre mind you!).

Anyhow, I believe the engine is very much the same as the NC50 / Hobbit, so have been looking into doing a 70cc upgrade (along with carb, pipe etc). There seems to be a lot of good reviews on kits like the DR, Malossi, Athena etc, though the DR and Malossi seem to be more ‘plug and play’ than the Athena. I am stumped on the head options though, in that they all seem to have very small cooling fins. The Malossi head, Athena head and Polini head all show the same thing, - tiny fins. Why do they have that, and should I be concerned about overheating because of using a head with a much smaller surface area? I’ve read of people re-drilling a Puch head just to have the benefit of additional cooling area. I just don’t understand why the likes of Athena and Polini make such smaller 70cc heads, but that’s why I’m asking the experts here!

Also, what is the function of the grooved ring on these heads? (as per picture shown). Is it anything to do with the decompression valve? My motocompo doesn't have a decompression valve, so I am trying to steer clear of any heads which are suited for those.

Thanks so much for helping!

That head is for a forced air cooled scooter. The only similarities are bolt spacing and the Brand Athena. It would be a horrible idea to put on a passively cooled bike that has shrouding and such in the way. Come to think, really trying to make any significant power will present even more heat issues than other bikes because of the airflow. On that bike, with such a small wheel set and final drive it may be a waste of effort and money to go big for the Athena. Adding an expansion chamber would ruin the purpose of the bike after all.

That ring is for an o-ring, a thin copper wire meant to crush and seal. Not all heads have it.(edited)

Forced-air cooled cylinders and heads(like you find on most scooters) have small fins as they're covered in shrouds and air is pushed past them even when the bike is stationary. Engines without a fan and shrouds (like most mopeds) have much larger cooling fins.

I have hobbits and motocompos. I'll make comparisons for you.

Thanks for the input fellas! Keep the useful info coming.

Honda city turbo 2 AND the motocompo? there is no greater win.

my jealousy is crippling

oh man though I'm pretty interested in the idea of trying to make a functional tiny pipe fit it.

Haha, thanks for the welcoming post mate. I've included a few pics of the City below, along with some of my creativity with a ZX9R exhaust :)

I'm definitely considering making an investment in a custom expansion chamber. The only concern is the cost, as either option will cost more than $500 to land at my door. Example pics attached. The improvement is undeniable though, with around a 10km/h improved top speed, making it able to hit almost 30mph!!

I'm still weighing up engine options, but on the back of the help I received here yesterday, am thinking of using a Puch head with all the extra cooling area, but re-drilled to suit the Honda pattern. I'm thinking of going with the Polini or Malossi 70cc kit, since they are more plug and play than the Athena (plus a 46mm Puch head is easier to find than a 47mm one).

Anyway, some pics below. 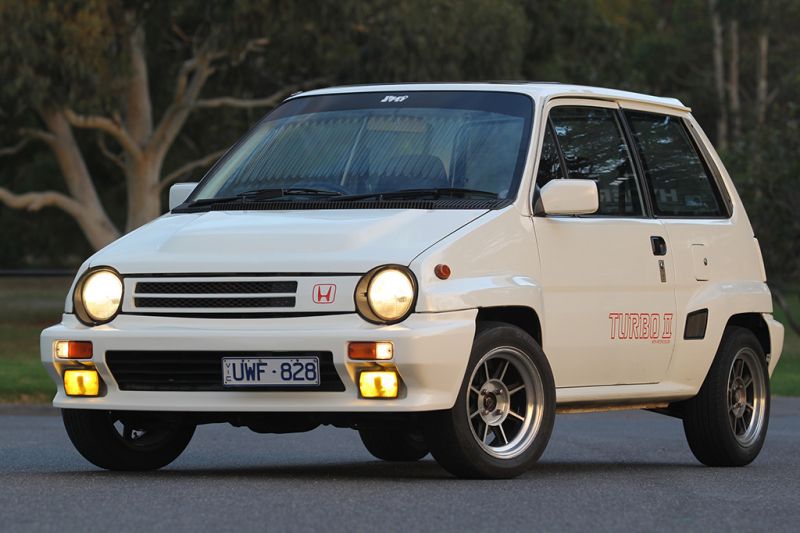 oh man I love that so much. the pipe and the car.

derbi heads also can pretty easily be modified to fit Hondas and have better cooling but may be too wide. that was always the goto though. I used one of those scooter ones for a few minutes but it's not a good idea in any way

Cheers mate, i'll keep that in mind. Unfortunately not many of the sites (maybe none), have the exterior dimensions listed for these aftermarket heads, so it's a bit of a lottery as to whether some of them will fit within my frame. There's a bit of room though, so I think i'll be OK.

Haha, I didn't actually think my lowly fold up scooter would be all that appreciated around here!

Also, re the earlier tip on the Derbi head, I remember now that I didn't look too hard at those because they mostly have the provision for a decomp valve, which is not something my engine uses. I'm still thinking the re-drilled Puch head will be the better bet.

Doesn't mean you have to use the decompression valve. It can be left to sit but if you have the option I would get one without.

Would the decomp valve not need to be welded/sealed up though?

I'm thinking just getting one without it will be one less hassle to worry about.

> Haha, I didn't actually think my lowly fold up

> scooter would be all that appreciated around

> Also, re the earlier tip on the Derbi head, I

> remember now that I didn't look too hard at those

> because they mostly have the provision for a

> decomp valve, which is not something my engine

> will be the better bet.

They are the rarest/coolest fold up to acquire in the US and very sought after in decent shape. Even though its a no-ped it's very much in the same vein. It's a bike I've always wanted to own, but I've only had the privilege of sitting on a minty one at the Dos warehouse.

A re-drilled Puch head is nice option to avoid the decomp. There are plenty on the market for decent prices also.

> Would the decomp valve not need to be

> I'm thinking just getting one without it will be

> one less hassle to worry about.

You don't have to seal it off. They can potentially leak due to carbon build up. I wouldn't be to concerned with a larger head unless you install a cylinder kit.

That Kuma pipe looks really great... & so does your Turbo II! Very envious.

I can only pretend that my bike fits easily in the "trunk" of my car :<(

Putting my Honda in my Honda works a little better than Will's method, but it's definitely not the same..

Owning and using/riding a Motocompo for decades creates my opinion to leave the engine as it is. A good tuned Motocompo in it´s original specifications hits 35 mp/h - and finally thats ok for the vehicle itself. 8" wheels and lousy brakes, a flattering ride-experience.....35 is enough for that thing.

Made the Nurburgring in 27 minutes with it....there was no need to brake the entire trip...

This bike fulfills it´s dedicated purpose - to be a commuting scooter from the suburbs into the city, or from the train-station, the airport or harbour into the inner city - very well finally. Practical like not much else and a headturner indeed.

Dangerous in traffic-crowded cities, it´s not unlikely to be overseen quickly.

Made 40 circumventions of Arc de Triomphe in Paris....all you could see was a head above trunk-lids and hoods....