I went to this guy's house to buy a Dellorto carb from him for $60. Me and my fiance ended up staying for dinner and talking about mopeds most of the time. He is a year-round mopeder like us, and used to fix mopeds in downtown Toronto. We saw his photo album with chrome and gold plated mopeds and stuff.

Anyway, this guy is pretty clever with mopeds, for example he put a Batavus head on his Puch to increase compression and make it go faster. He told me how to modify a carburetor jet using these really small files made for cleaning the tip of a mig welder. To make it smaller, he fills the jet with solder and starts over again. This interested me because my Torrot had a #64 jet in its original Dellorto carb, and the biggest jet I have now is a 52. It only runs with the choke. I have a deadline to get this bike up and running and sold, already have a buyer, and not much time to wait for a new jet to be shipped, so I might just try this method out.

We told him about Moped Army but he doesn't touch computers, it's too bad because I think he would have a lot to add to this group.

Hey Jon, I'm in Toronto. Who is this guy ? bruce

His name is Mike, and he drives a Puch Magnum. He actually lives in Brampton.

Hey guys, I live in toronto too. Does he have parts for my Batavus??

hey Frank, I need parts for my Batavus H50 as well. Jon, can we enlist this Mike guy as a resource?

Who is this guy Mike? Try to call him if your in Canada and have him post pictures of his gold and chrome moped parts.I thought it might be Targaped at first.

yeah Old thread dudes. I have a magnum for sale in Toronto though. Just sayin

that magnum is beaut

You gonna be ridin?

Yep I will be! I got my grande up and running over the holidays and the moby just needs some more $$$ put into it and it's good to go as well. Planning on attending the Mad Bastard rally?

Actually that was a lie, I know the Grande WILL run once I figure out how to hotwire it...lol

up for sale again curb? thought you were making your first "fast" moped and keeping that build all hush hush

who knows. Im all over the place. I just wanna ride sans le problems this summer. Maxi run well? Get me in touch with Matt McCartney would you? Fucker never emailed me back.

It's a scooter rally but apparently a bunch of mopeds show up too! You can see on the list of past participators...It's supposed to be a race but I'm planning to go just for fun.

He knows what he is talking about. What is your theme this time around?

Yeah, I don't plan going all 800km. Don't want to risk a breakdown in the middle of nowhere. I'm just there to hang out for a few hours with people with same interest. Are you going this year truckerick?

I live in Thunder Bay NWO, I'd like to ride aroud in TO.

Any organized moped groups around there?

there's a facebook group for Toronto riders, I got rid of facebook though so I can't link you.

I still don't know if I want to enter the next mad bastard rally .

No ideas for a theme either .

On the other hand , it's in Barrie so I could stay at my sisters place instead of a hotel !

The military theme you had at the last MBSR was cool Rick!

Ven dont waste a panic - 800km in one day is just compressing a couple of weeks moped commute into 24hrs, if your ride can not go for two weeks without breaking down then there is something wrong. Even if you break down there are good people there AND on a moped you can pedal the course (think there must be a trillion points if you pedal the entire course on a moped)

Ive only met him once and i got a free maxi so ive been screwing around with that, i havnt got one running reliably yet but by the time i can drive them ill it running

Graham, you bought mine though right?

lol no but wait i donno if we r talking about the same guy, i think it was a guy name ian? stinkypete on M.A

Im jealous of your been in Kingston. Place is rockin!!

speaking of Kingston , I bought my 51v from a guy in Kingston last October . 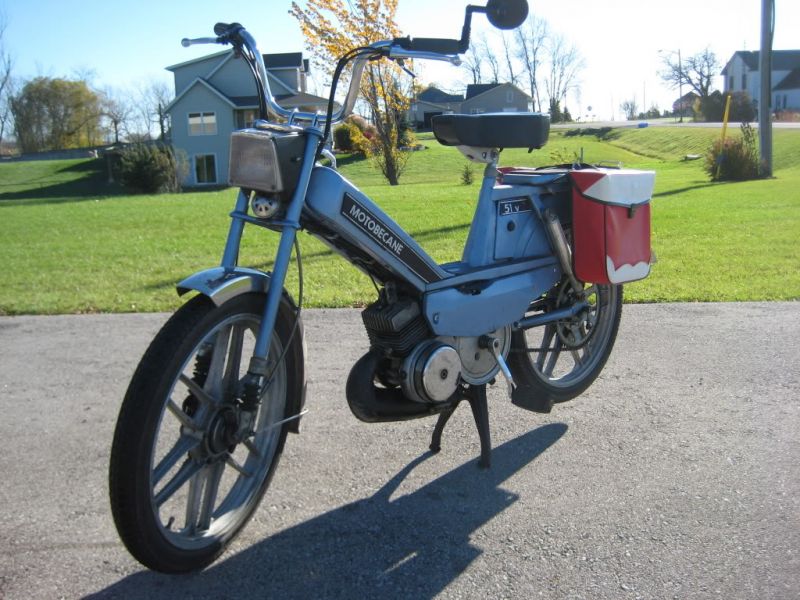 I am glad you bought that 51v Rick - it was driving me nuts to see it on kijiji!