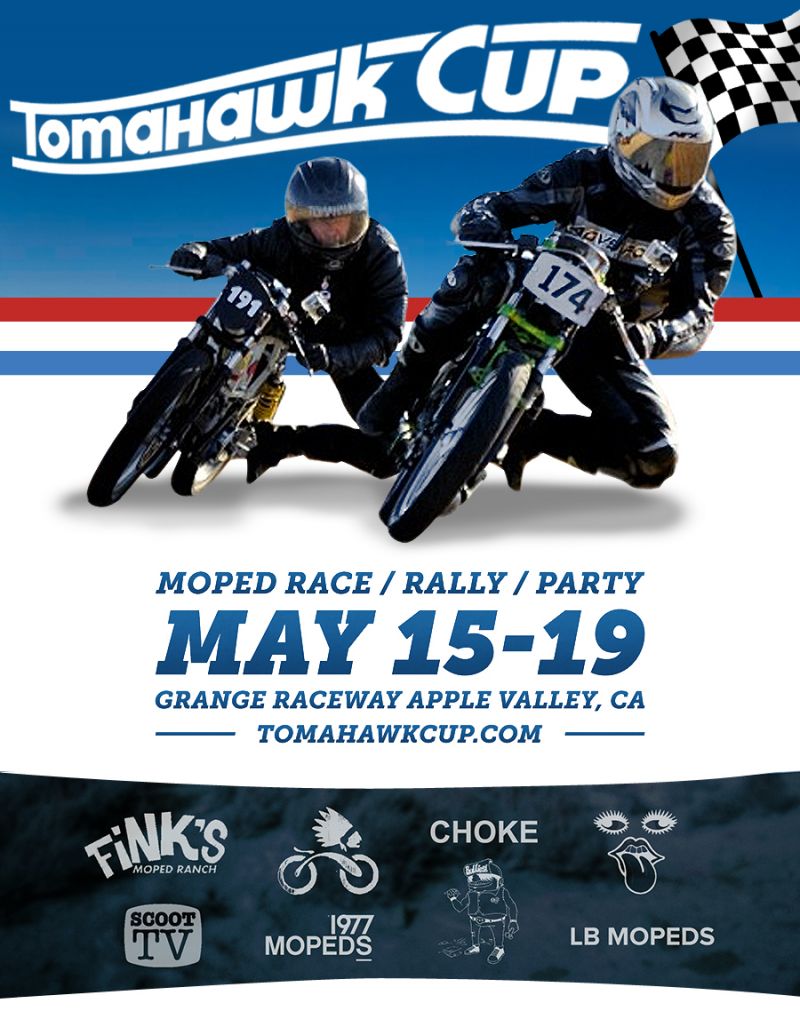 Register online and get a free T-shirt at the track.

Free camping and racing all weekend 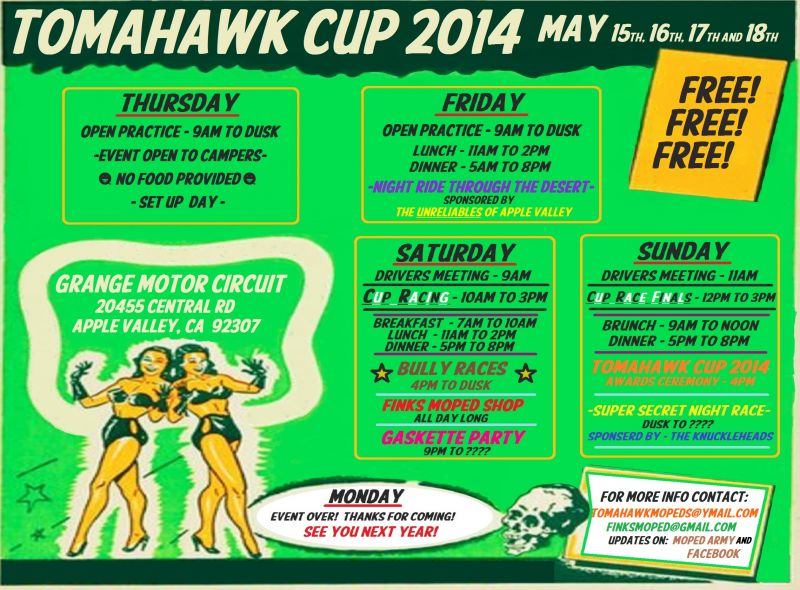 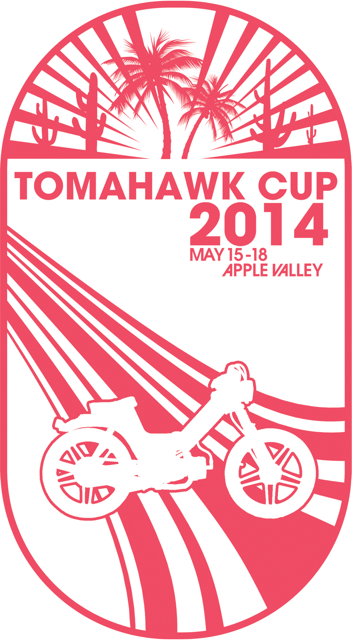 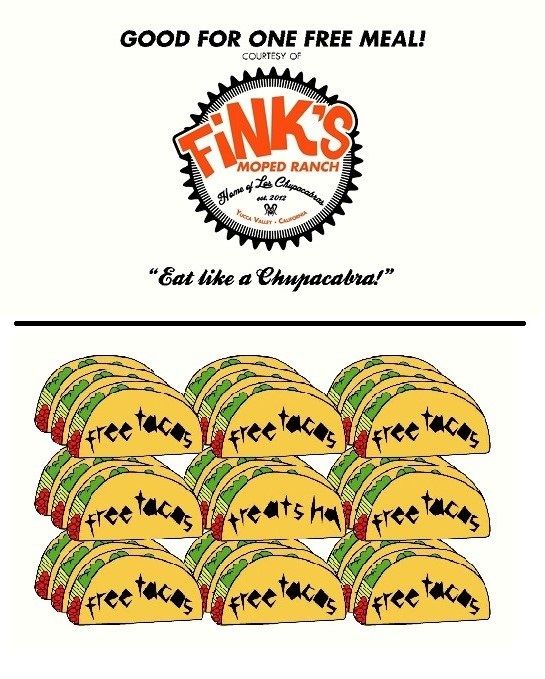 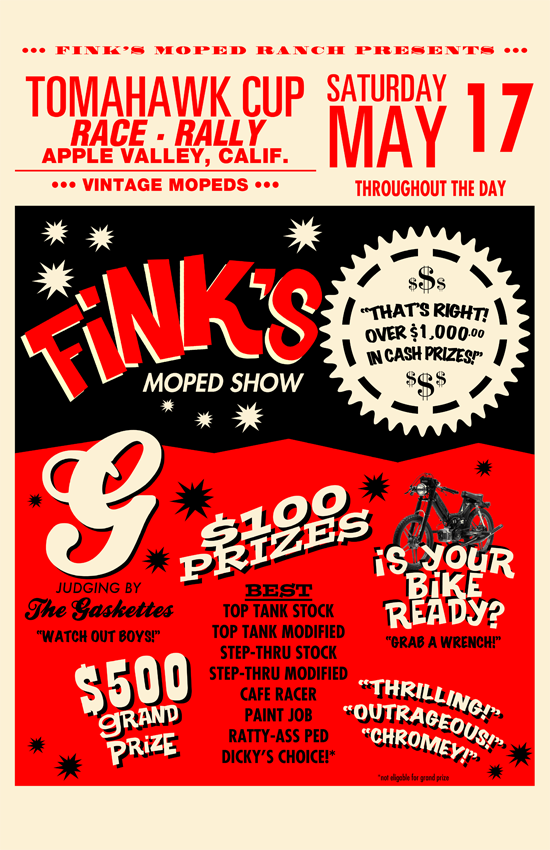 Free Polini Puch raffle bike by LB mopeds, I just finished the adjustable pegs and should be painting the frame next week.

Desert night ride with the Unreliables,fun races with the Bullies and Party with the Gaskettes, etc... 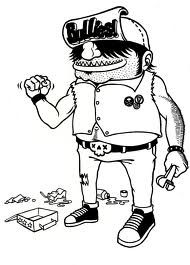 Thx to all the racers/spectators who have already pre registered for this event and special thx to those coming as far as the East Coast:

Thx to all the sponsors and people involved in making this beautiful moped event happen!

sounds like so much fun... not this year... but maybe another.

Thx, see you there!

I just hung up with Dave at Fink's moped and the rally pack sounds awesome with $50 worth of cool stuff , recycle grocery bag with Finks moped logo, tomahawk cup t-shirt, Choke frisbee, Bullies k chain,tacos food passes, and much much more...

It's going to be so much fun. I can't wait to see you dudes I'm May.

Up to $1,500 in gift certificates at TREATS divided among the top 3 finishers of each class, stockish, non variated, variated, unlimited.

As an organizer and racer, if I win a prize I'll give it away to the next finisher.

curious, stock derbi pyr reed ported with pipe. is that in the stock class or variated?

You can race a stock derbi ported with 15 carb and pipe in both classes, stockish and variated.

We could have created a stock class 100% stock, no porting no pipe but it's very slow and boring, no room for tuning, and I tried to launch that class in the past without any success cause most stock bikes on the streets already have an aftermarket pipe or a 15 carb and people didn't want to convert their bike back to stock just for a race, or mopeders commuting daily on a super stock moped didn't care about racing at all.

To me in the stocksih class with room for tuning and track performance, any moped using a stock factory engine cylinder and head ported with 15 carb max + pipe is fine, as long as it uses stock factory bottom end design no added material to the cases, stock ignition, stock transmission (variators, clutches, etc...) no after market performance parts (other than clutch springs) but mods to improve the stock system for track like lightening, drilling, cutting, welding are ok.

Some might argue that to win the stockish class with strict 15 carb + pipe rules no added material, launch lever, frankein stock motors, etc...people are gonna choose a dual variated moped and we're gonna end up with only light and quick honda hobbits on the track giving no chance for the Tomos 2 speed, puch 1 speed, peugeot single variated 2 tiny ports, etc... well if this is the case as the event grows with can always adapt and create sub classes within the stockish class based on transmission type. But for our 1st event, lets keep it simple and learn from it.

Also, during tech inspection we're gonna have to deal with few people bringing Frankein stock mopeds using the best stock frame and best stock engine parts from each moped brand eliminating all the factory design flaws and potentially making their bike the best weapon in the stock class crushing the competition.

To me it's a non factory stock prototype class that is for sure interesting and would showcase the skills of the best tuners using all stock moped parts available but once again belong in the stockish class as another subclass with separate rewards. I don't think it'd be fair to have them compete against a stock racer limited by the factory moped design and worked hard to get the best out of the factory motor with flaws.

Keeping it factory stock 15 carb = pipe would also answer the question of "which stock moped is the fastest on the track in the hands of a good tuner or good rider?"

Lets the brands compete against each other first, than if the event grows we can have more leveled classes based on transmission types or prototype engine.

We can also ask during tech inspection if the motor is ported or just stock with 15 carb and pipe.

Ultimately we want everybody to be able to compete in the stock class which will be super fun, from the newbee Tomos owner to the master tuner frankein bike but we're gonna have to find a way to reward everybody in a fair way and encourage them to come back the following year.

When you have no chance at all racing is just not fun and too much domination kills a race event. "Strict" rules from the get go might turn off some moped racers who would want it more open and won't participate, but those rules are key for long term success and evolve as the event grows. (edited)

Christophe I think you are going to be blown away when some stock 1 speed takes the stock class haha :)

Haha... that might happen, remember that guy from Ventura killing it on a 1 speed?

I've seen the potential of a well tuned stock 2 shoe clutch, combined with the right cylinder porting + 15 carb + pipe + points timing + gearing, it should be fun to watch blasting on the track.

Next year I plan getting ready for the stock class, a hobbit, puch, tomos st.

The dude who you built the top tank blue frame Puch for wants to bring me his stock hobbit for cylinder porting, variator mod + 15 carb and pipe before the race event. So busy already though...

Are you guys busy, he wants some tomahawk special but I might try to send him your way?

I toned down my stock moby av10 motor with a low mid range Tomos techno pipe, lost lots of rpm and top speed but regain low end for short go kart track, less stress on the stock heavy variator clutch drum soft taper that tend to unscrew itself and slip on the crank under extreme slippage at take off.

I may have find a way to install a key way. (edited)

Fucking so wish I could go to this. Is anyone going to run a vespa in any of the classes? I wanna hear about it!!!

Running a ciao in the stock class, non-variated.

Just to you let you know, so far with all the sponsors committed for the next 5 years, we've been able to collect between $15,000 to $20,000 which will cover ALL the expenses to make such an epic FREE moped event happen this year.

ALL FREE for the moped people!

I don't think it has been done before.

All the volunteers are working very hard to get everything ready in May. It might not be perfect as it is our first event.

We hope it becomes successful. And unless you have a valid excuse, you shouldn't miss this unique FREE event.

Hope to see you there and come play with us! (edited)

I think someone else had a free rally last year too.

I have a stock 41mm cylinder that might have a shot.

> Fucking so wish I could go to this. Is anyone

> going to run a vespa in any of the classes? I

Buddy is taking his Ciao in the variated class. Will see if I can get some picks since he is dumb and has not put it on garage... 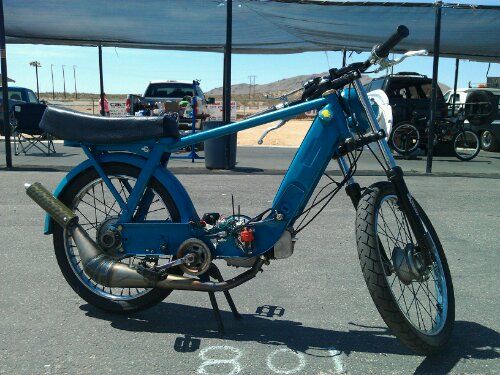 Maybe Terry Dean with his Ciao malossi 70cc from Sacramento?

Got some banners done, Yeah!

Got some banners for the track.

Give away raffle race moped Puch maxi polini 65cc by LB mopeds getting the primer coat at Tomashop.

So you have to race the raffle bike after you win it? I'm down.

yep that's the deal if you want to claim that bike yours and bring it home.

on that note, dry clutch for puch e50 is where it's at. Been wanted to come with one, no more of that wet clutch stuff.

Guess it'll be a running bike then, rad.

probably have this covered already but u may be able to get someone from the r/c racing field to announce and run their amb transponder system. would make it very easy to print out heats as well as keep the program moving