Just an update on the SSR Lazer 5 as promised. The Lazer is running better than ever. I usually ride it every day, a lot of short rides (2-5 miles), but at least twice a week i take it on a good ride, usually 20-30 miles round trip. Just letting those interested that the Lazer is holding up excellant, no problems what so ever. It does seem to have a little more power than when it was brand new, so maybe it's just getting broke in good. Anyway, i'll keep everyone updated on the good and bad of the SSR Lazer 5, 4-stroke moped.

Hey Jim you do realize that most of our 30 yr old bikes are full time transportation right ? I gave up my car in favor of mopeds.

Now ride that shitty Laser5 everyday and everywhere like you have no other way to get around and see how long your little toy holds up.

Hey Jim! Just wanted to let you know that after 5 years and a couple thousand miles my Whizzer is still holding up well. A few things have fallen off, but nothing important yet.

I added some air in the tires and just checked the oil, looking a little dirty.

Good! That is excellent news. Is there a SSR Lazer 5 forum that you could login to and tell someone who gives a fuck? I thought you were instructed to go fuck your mother again on the SSR lazer then report back? What happened?

damn. i was excited for a thread with a different troll.

I wanna Whizzer! Gotta pee too!

Funny, earlier today I thought- where is Jim :) Maybe it's not funny IDK :)

I'd like to hear more about the bad parts of the ssr lazer 5 chinese pile of scrap. I hear they break down constantly and the owners of these spend most of their time trying to convince people that they are worth something they aren't so the resale value stays high when they try and get the google search to come up with by making millions of posts aka spam

Funny, I was on a forum today where they were saying most of MA were spending all their time working on their bikes rather than riding them. This, after googling 70cc kit upgrades engine lifespan. Because I've been thinking of adding a kit to my Batmoped. Just saying what I read, not making judgments.

"Most people (Moped Army types) that run high powered engines just accept that they have a limited life span, and just keep on rebuilding and repairing them. They seem to enjoy working on them more than riding them, which is fine, but can get expensive."

Where did you hear they break down constantly? Not joking. Can you post links?

^ Yeah xeta a lot of us do break down a lot and its because we push kits to the full limit. When you try to go 60+ mph on a motor that is basically the size of a grapefruit, well its going to break.

Sure you can slap a 70 kit on a tomos and run a big jet in a small carb with a stock pipe and it will last for years upon years. take that same kit ported out with a 24mm carb and a monster pipe that barely even fits on the bike and push it as hard as you can constantly and see how long it last.

Riding is what gangs do.

Hey, that "wizzer" is pretty cool, i've never seen one of those. Who makes those? Kind of looks like a bicycle though, which is ok i guess, i just like the bigger seat look myself. I'm glad to see the replies to my post, nice to see the gang's still around. Thanks for the addition of common sense, Xeta, i agree, i'd rather ride a moped than work on one, but i guess some people just like messing with them all the time. I just wanted people to know the good and bad of the Lazers, just in case someone may be interested in buying one. Didn't know that was a bad thing.. but that Aaron, sure is a nasty little boy, isn't he?

Locally someone is trying to unload one of those lasers for 1200 bucks and also a whizzer for 700. No sale for a month.

lazer 5 been out of business since 09

same looks except i had the rims polished

watch out for the new 2013 wildfire speed kit

I've got most of the same kits I had for 5 years so no they don't blow that easy. I got puch polini kits/bikes with 5,000 miles on them and running strong.

My puch magnum xk with za50 Gila in my profile has over 4,000 miles goes 60mph and I take it everywhere.

I call BS. Stock or kitted no difference if you build right

Hey where can I find these speed kits for the SSR Lazer 5, I dont think they exist because the company has not aftermarket parts, or any parts for that matter. I seriously hope none of these things break down cause you're gonna be fucked. I've seen non running ones on Craigslist for 1200. Either the owners who were stupid enough to buy them were also too stupid to work on them or they break down within a year of purchasing so everyone is selling slightly used broken Lazers. I think they should keep cheap chinese knockoffs of knockoffs in

China, not here in the USA, even old guys like Jim are disrespecting our country by buying these things. I bet Jim will try to defend his purchase but we all know he's just a commie fuck who probably ran instead of sign up to fight for our country.

SSR Lazer 5's were put on this planet to part out the front fork and disc brakes.....that is all.

Ok so you have a moped. Ohh wait, it doesn't have pedals ? Well we have nopeds too like the Honda Urban Express so thats ok I guess. Holy fuck, is that a 4 stroke engine ? Why yes it is so GTFO !!!!!!!! Also before you bring up the Indian 4t moped you should know that no one gives a fuck about those either. (edited)

There are pills you can take to calm you down. Just sayin.

Fuck you xeta. Go ride your stupid Batmoped. What are you like 8 yrs old ? Who the fuck over 8yrs old thinks Batman is still cool enough to try to design a vehicle with a Batman theme?

Maybe you should make a Robin themed Lazer5 so you can ride around with your ass buddy and you guys can act like pirates searching for booty. 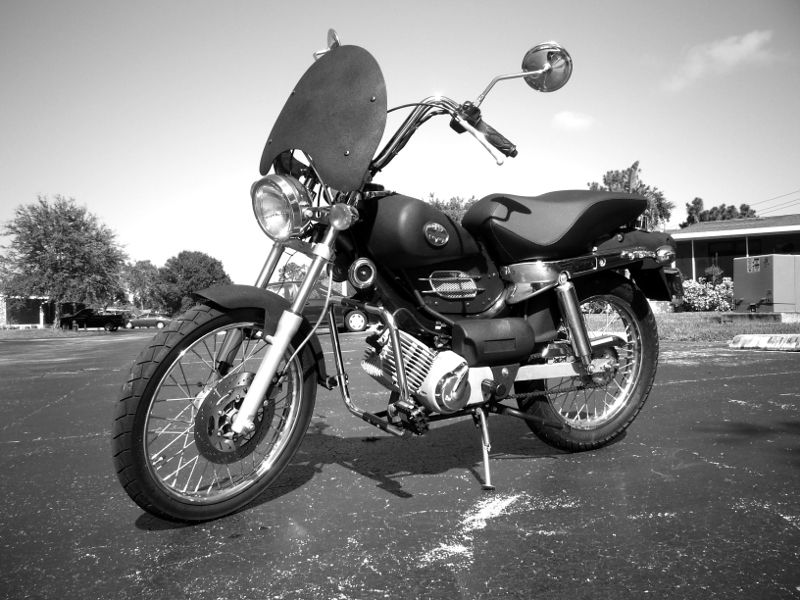 You got it wrong, Batman was slamming robin... in the ASS

You can't register a "big bore" kitted bike as a moped in any state. There are legal issues a company like that needs to take before mass producing and selling illegal mopeds. The company rests the sole responsibility of that on the distributors. Kind of shitty to throw the people who sell your over priced junk, under the bus like that. Kinda proves the support that you'll see after buying one of these things

Lazer 5s are illegal as mopeds in many states anyway .

People in Ohio have to lie and say its a lazer 50 to get a plate and if they do get pulled over the can be in trouble .

Hey Xeta, i just saw the pic of your bike. Man, that looks sharp! I'd ride with you ANYTIME!! Anyone that doesn't like Batman... well, they're not smart enough to know what's cool and what's not. He was always the true super hero because he didn't have super powers.. just gadgets to help him fight crime. I'd post another pic of the Lazer, but you've already seen mine and i haven't done anything new to it.. just riding it and having fun. I heard that Aaron recently bought a Lazer 5 but will not admit to it.. some type of ego thing i guess. Also, what's wrong with buying something that's made in another country? Where is Puch made? Where is Tomos made? And all of the other mopeds? Which ones are MADE in the US? Which ones Aaron???

Ken, you're smarter than that. What would make a Lazer 5 illegal?