So after a couple years of hearing all this moped talk from a few friends and HNR'z members, and finally getting on one and blasting down chicago alleys i had to have one. So with a garage full mopeds some for sale, some project bikes i ended up purchasing a beat old 83' sachs general 5 star. It was pretty haggarad as the photo's will show, and not the most popular power plant as i was soon to find out, but i loved the lines and saw some potential for a new project. 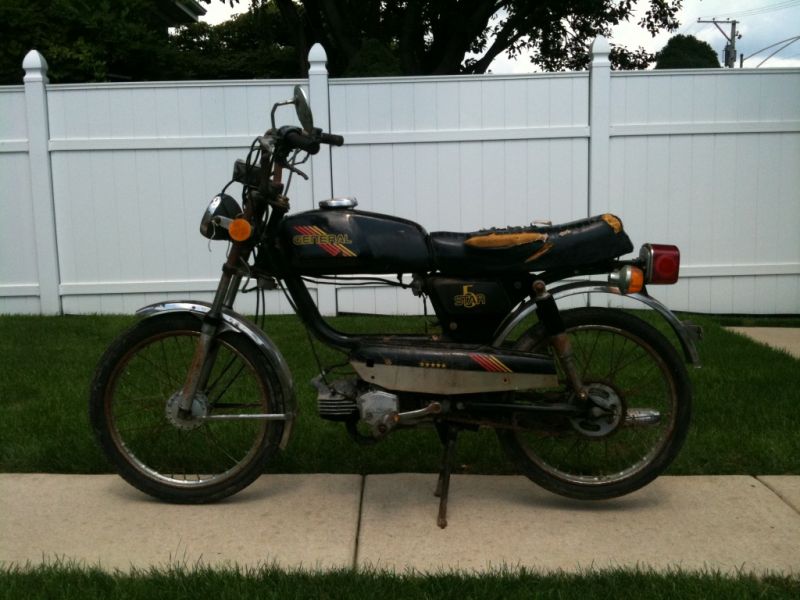 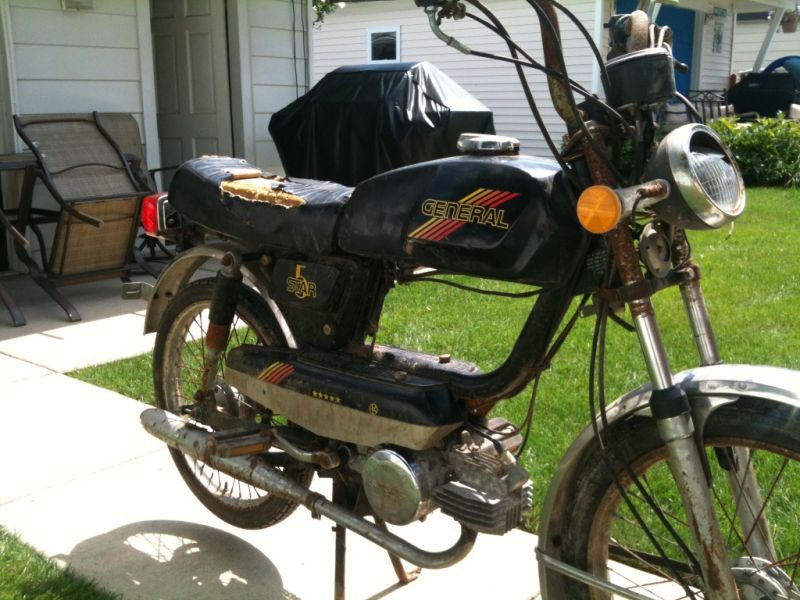 So i got it home, signed up at mopedarmy, did a ton of research, and started tearing the bike down. I had a pretty good direction of where i wanted to go with the bike, color scheme and engine upgrades. So it came together pretty quickly. After completely stripping the bike down, i salvaged some parts and made a list of things to get. I chopped and grinded off all the tabs and brackets off the frame that wouldn't be in use. Dissambled the wheels down to bare rims and hubs. Then sent the frame, swing arm, rims and hubs off to the powder coater. 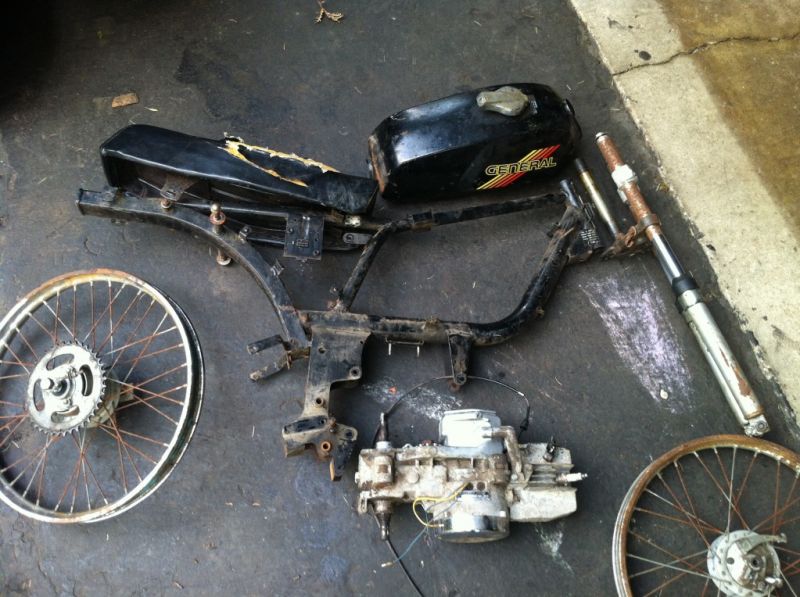 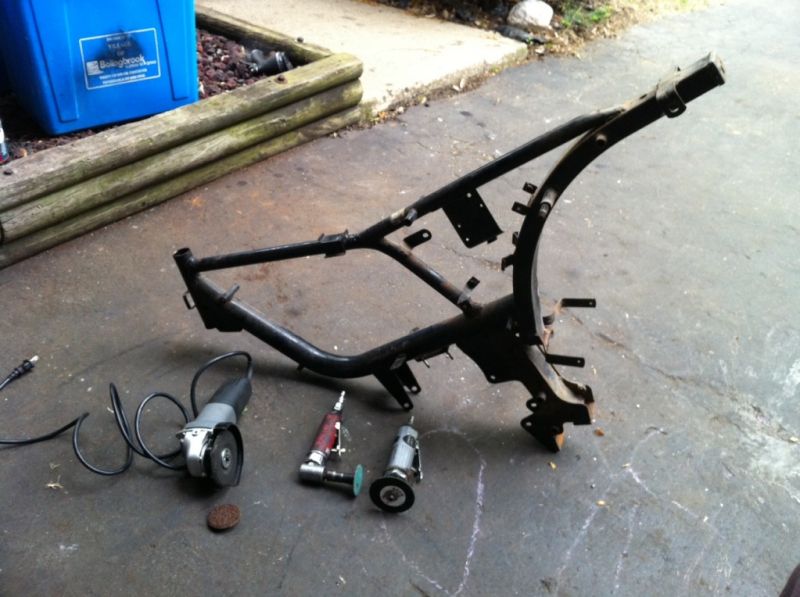 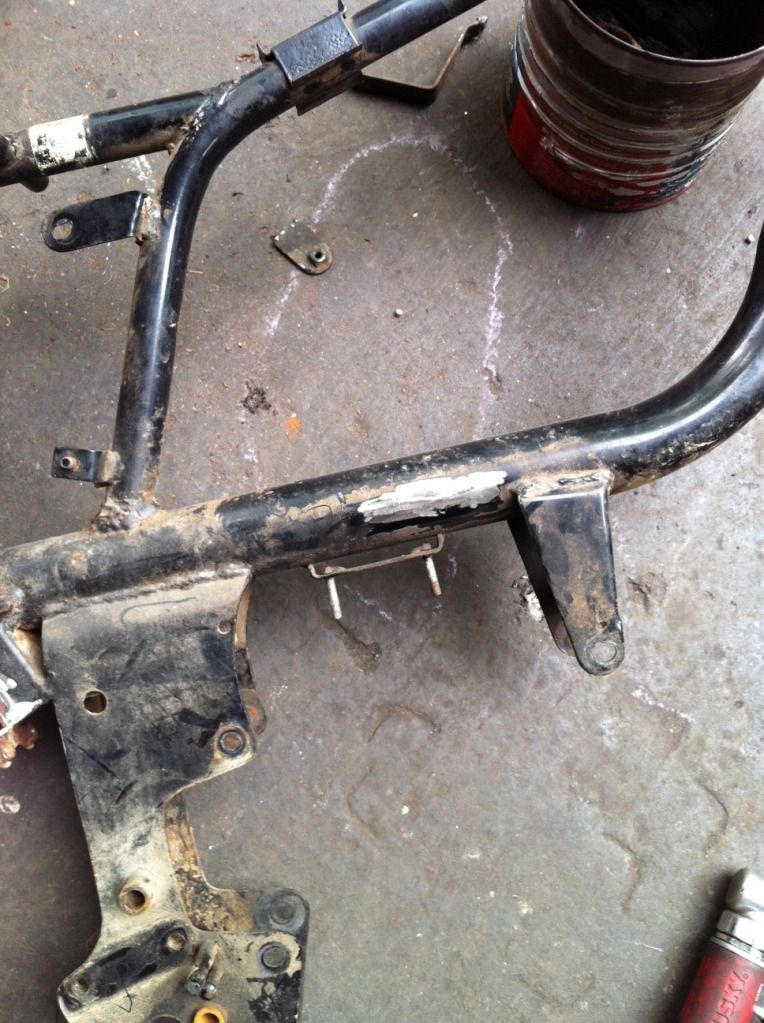 The gas tank rust was more than impressive. Shook about a 1/2 pound of rust out lol. I decieded to try the vinegar and salt combo outlined in the wiki. Surprisingly 4 gallons of vinegar and 2 boxes of morton salt later it was near mint again. Then stripped, primed, and painted the tank and front forks and headlamp bucket. Went with a distressed look for the side panels, tank, and head lamp. Alot of work for what looks like old worn paint lol. Hours of prep work and sanding, couple layers of primer, then multiple layers of white, and to top a few layers of flat black. Once everything was dry, wet sanded till the effect i wanted showed. Super smooth to the touch, no more rust, and modern protective paint. Finnally all the parts showed up from treats and 1977! Picked up the frame and wheels from the powder coater and set in on assembly. 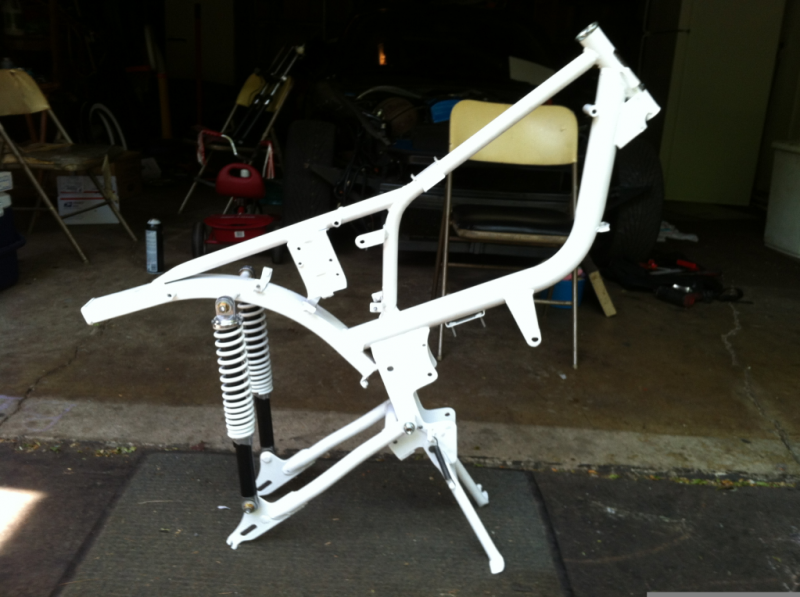 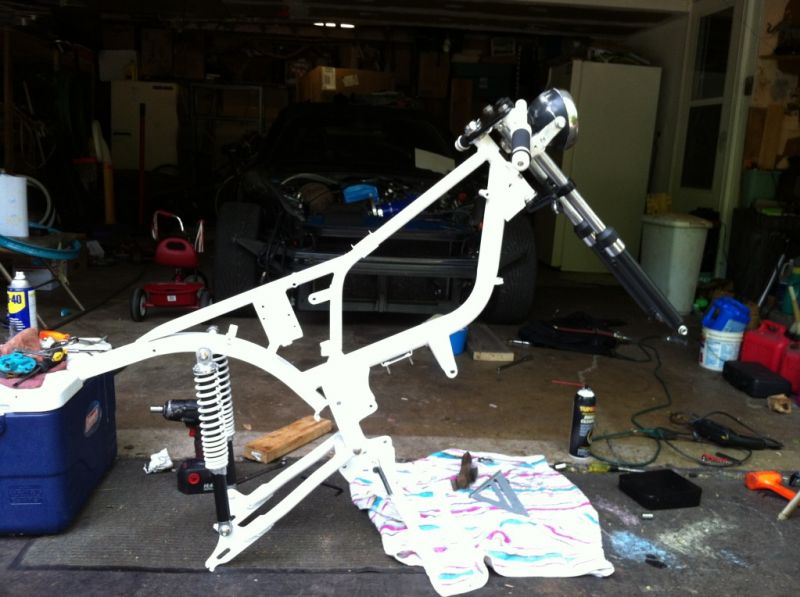 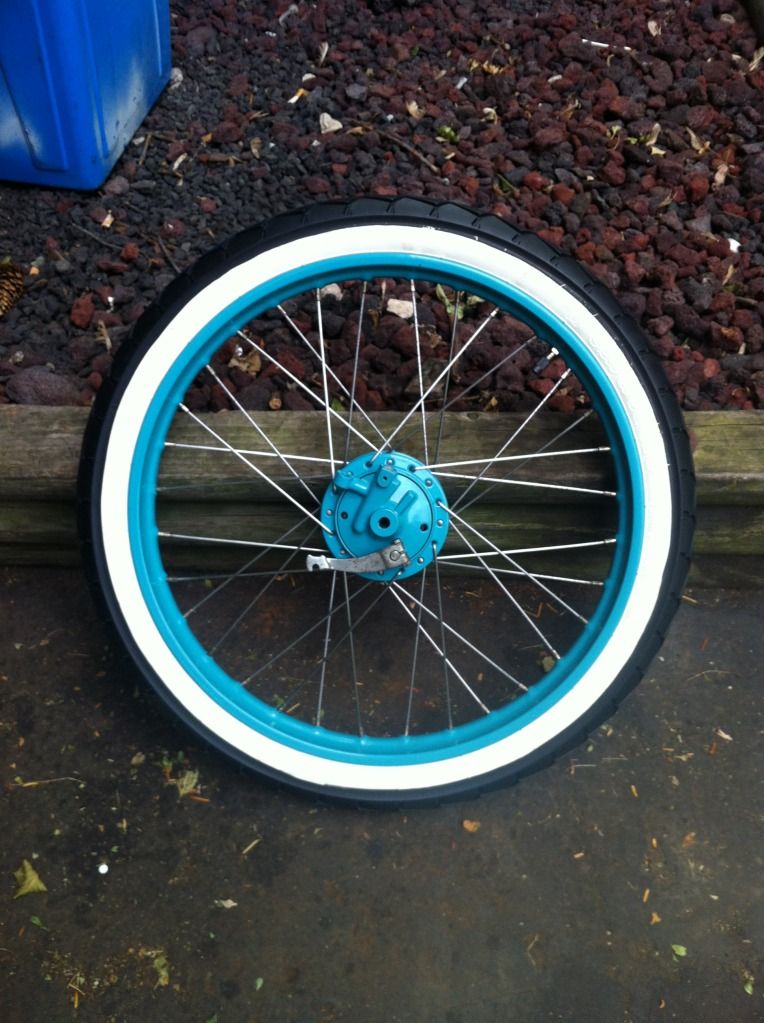 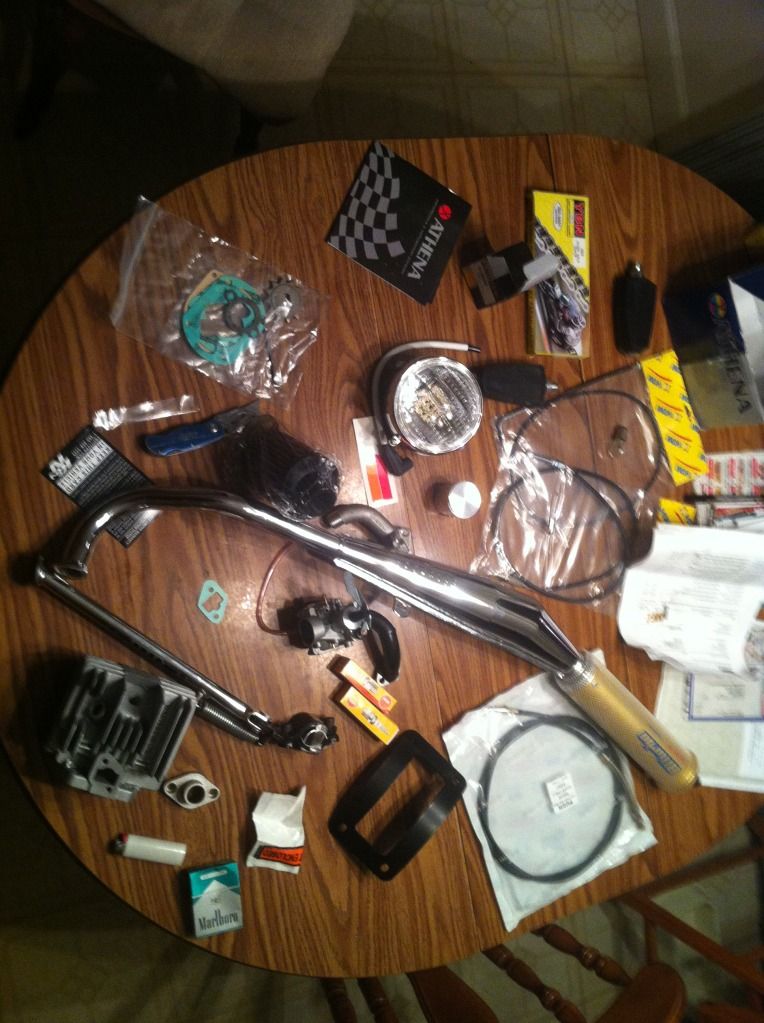 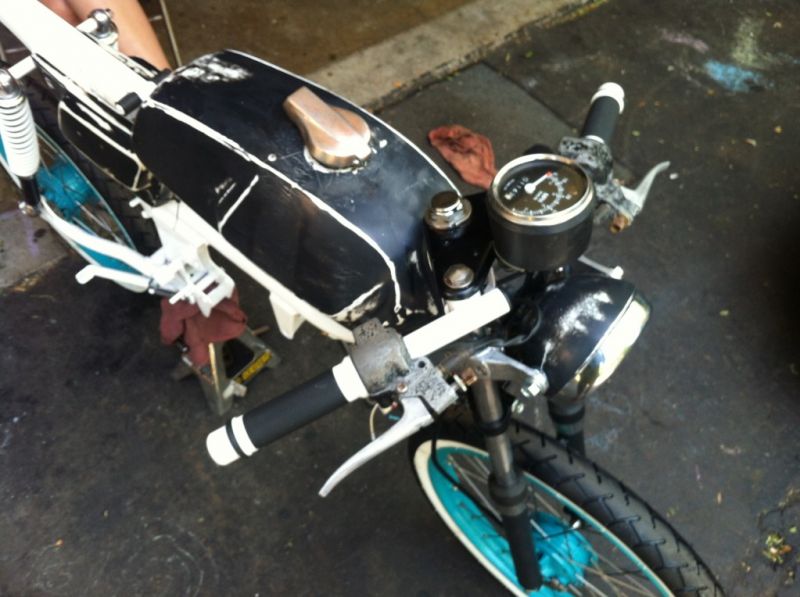 Initially just threw the Athena kit on to make sure every thing fit together and ran properly. Then after a few miles stripped the engine back down and swapped the internals over to a clean case that was gasket matched on the transfer ports and did the same to the athena jug. Also grinded some material off the side of the cases and threw on a taller 12 tooth front sprocket. So the engine setup is an Athena 70cc kit, MLM 18mm intake, VM18 carb, tomos biturbo exhaust hacked to fit, and a frankenstien clutch with metal kevlar lined disks from kdm nick! 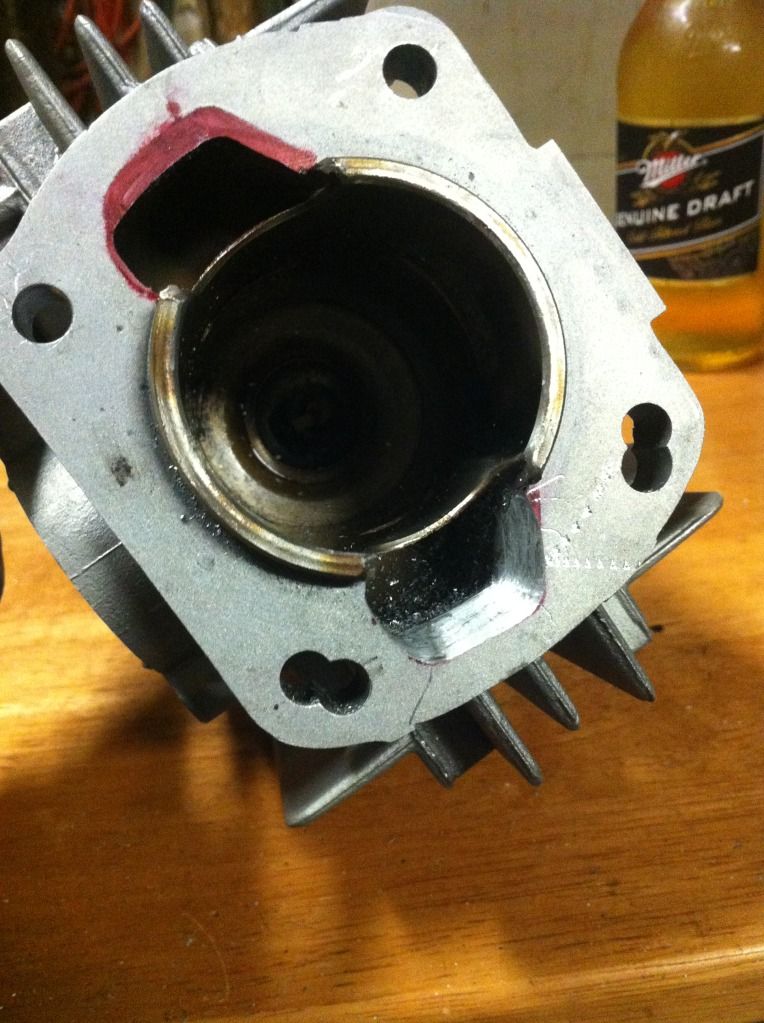 All together and pretty happy with my first ped' project. Major thanks to Dom of the HNR'z, KDM nick (for the amazing clutch disks) and Treatland and 1977 for the quick shipping.

Wasnt that artur kawa bike? I think he had it posted on here.

> Wasnt that artur kawa bike? I think he had it

Yeah, ive known artur and dom for awhile and scooped it from him 2 months ago.

Awesome build though. What kinda clip-ons are those?

> Awesome build though. What kinda clip-ons are

Indigan 28mm clipons modified to fit the 25mm general fork tubes. And thanks.

speedometer kills the whole bike for me. but seriously really nice job. How fast does she go?

> speedometer kills the whole bike for me. but

> seriously really nice job. How fast does she go?

yeah im not really big on it either, but its not that bad in person. Before the gasket match on the kit and case it was low 40's. Now i added a bigger front sproket havent tested the new setup yet but the engine has much throttle response. Hoping for 40's...

Love that wheel set up. Mine are the same but the hubs are still gray and the rims are red. White walls are awesome.

this is awesome! but cmon, yeah wheres the side profile shot? i cant even see what this really looks like.

It's a lot better than most of those pedshow bikes. For being a noob, and only 7 weeks, that is an excellent job.

Looks great! Nice to a built up Sachs general!

fuck yes. i hope to see alot more of this coming up. sachs parts availability is finally catching up. these aren't the "avoid at all costs" engines they used to be. i think that's owed pretty heavily to nick k and also builds like this.

Thanks for the checking out my project! And I figured I'd get a lil hate on the pipe, but it'll do for now. Planning on throwing a d crank or race crank with d specs in it. Maybe gear up another tooth to the 13 front sprocket and grab a new pipe, leaning towards mlm. Also reading up on the Pietcard ignitions. So if anyone's used/using one on a Sachs lmk how you like it. I'll get some more pics up probably this weekend, and a gps speed update! Hopefully it'll be close to 50mph. In the meantime it's back to my other projects s2000 in the background of some of the photos is draining the bank account quickly lol.

it looks better than what id have done with it

great job man! I love it!

Hey I was wondering where did you get the parts and can u plz tell me the names of the parts?

put those tabs back on there MR!.

i like that you used the obnoxiously-huge tail light that was on it. i am building a general w/ a hobbit drive train, and although i have an old ford model A light, but something about that light is cool. maybe it's being seen from the back and sides with 6V moped electrics (and hondas are better than most).