So I'm going to pick up my bike from Motomatic and.....

I had some engine trouble about halfway, so I flip a bitch and and haul ass towards home.

The thing is knocking a rod and pouring smoke so I know its done, but I want to save a tow bill to have it pulled off the interstate.

I turn in my street and and it strangles to death an starts dripping flames. I pop the hood and waste my extinguisher as a follow through.

The cops were cool about it ,and pushed me on home with his bumper 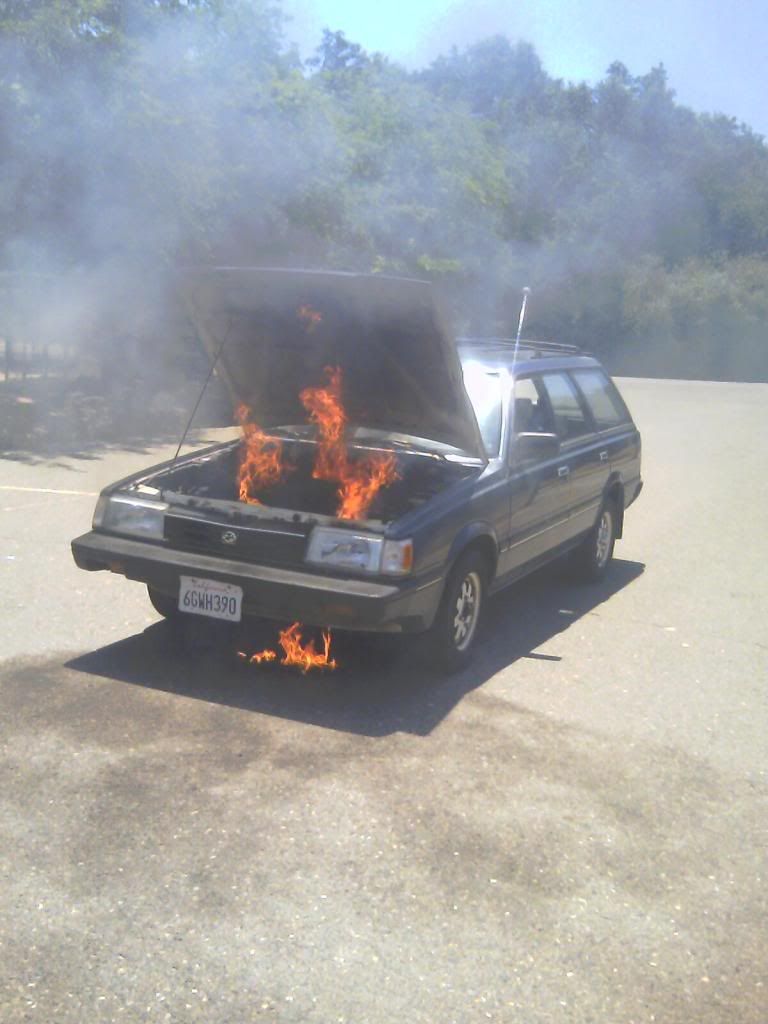 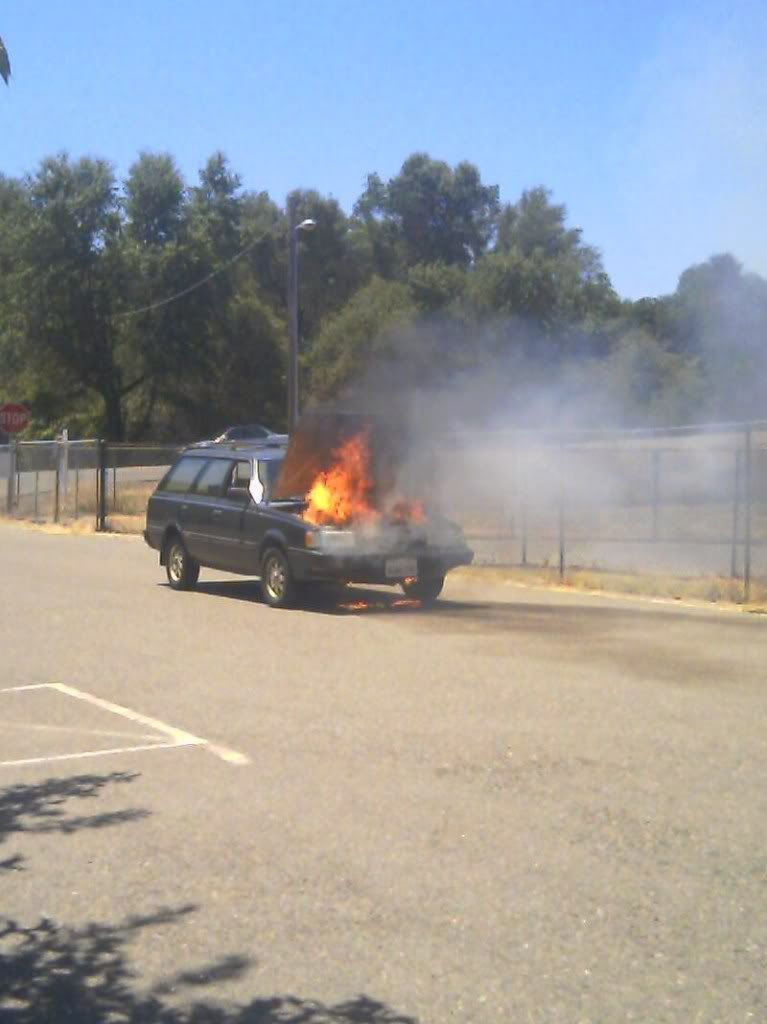 Wow thats just what one of the firemen said. LoL

When your car is on fire you should not open the hood.

Damn those old subies are so tough too

that poor station wagon. gotta admit this is a ittle scary hope it never happens to me. kudos that you had a moment to take pictures. what year/make is that car? late 80's early 90's no doubt? I love wagons...makes sense youd be going to pick up a moped with that.

i should keep an extinguisher in my car!

agree with joshua on that but good thing you had that extinguisher though. oh and you might want to next time hide your plate numbers....oh and most important of all...did the moped make it out okay?

ps lou c...right on point with the love of wagons! my first car was a 1985 oldsmobile custom cruiser! i loved that car, i put goofy stickers on just about every window of that g ride! :( it is no longer with me sad but funny story

Friday the 13th demons are causing a ruckus. My lawn mower blew up and my buddy blew a rear tire on his harley and almost became someone's hood ornament.

POOR SUBARU! Looks like a 91 or so Legacy. EA82 fuel inject 1.8l horizontally opposed is my guess. Not a car that usually catches on fire.

good thing you just spent all your money on your moped

Hey when you know your car is having trouble, drive it home as fast as possible until it catches on fire, it's much better than stopping for 15 minutes to assess the situation. Good job bro!

I don't need to assess a broken rod and no oil pressure. I know what it sounds like and what a oil gauge on zero means. I don't stand on the side of the highway with a cell phone attached to the side of my skull assessing and pondering what I know from years of experiance is a car that is on death row.

I fly as far and fast as I can down that highway as smoke, blood and bits af metal tumble out the back of the machine that failed me.

It's just a fucking car.

Look theres another one..

I went to motomatic in my shitbox Olds and picked up the Peugeot.

Do you think the ped is wondering, "hey , where's the Subaru?" 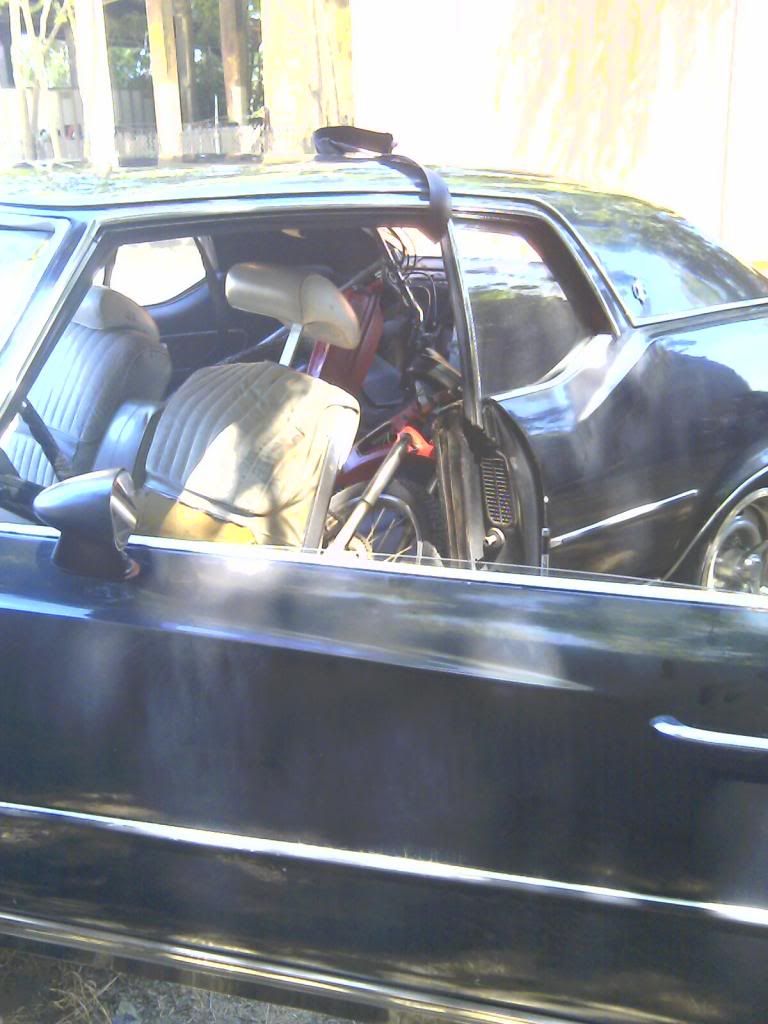 ^I wouldn't call that a shitbox i'd call it a car with much potential. What is it about a '71 Cutlass?

You're right, let the car completely destroy itself. Personally I let the wheels fall of my bikes before I even bother tightening the axle nuts. I'd say your good decision paid off, if a car burns to the ground maybe the insurance will buy you a brand new one. Hell maybe motomatic can fix it up right, then you can ride your moped to go pick it up!

Epic. Owned an early Ford Taurus POS. Drove to a bank to cash a check one day and noticed smoke from under the hood. Overheated rubber dripping on overheated something else resulting in fire. Walked into the bank, grabbed THEIR fire extinguisher and put it out. Went into bank, cashed check. Walked out, got in car, started it up and drove off. Enjoy.

> I went to motomatic in my shitbox Olds and picked

> Do you think the ped is wondering, "hey , where's

Ha ha ha I love this

i agree, the subaru is way more rad.

i also agree with the senitments expressed as "bummer"

> i agree, the subaru is way more rad.

> i also agree with the senitments expressed as

My first car caught fire 3 times. 3rd time did it in. Mid 80's dodge omni. Like a go kart with windshield wipers. Truly gotta love any vehicle that tells you it's had enough of your shit by creating it's own external combustion system as a final "fuck you".

As a former air-cooled VW Bug owner, we have learned to change all fuel lines after a few years. How many of us have seen an old VW on fire?

Teaser pics of the Motomatic mods, or it didn't happen.

Got nothing else to argue about orangerobin?

Actually Orangerobin is right. As I think back now I behaved like total dick. If I would have just hobbled the thing onto an offramp and called a tow truck, the car that served me well would of had a more dignified trip into the bone yard and maybe even been revived by a more caring person.

The way I selfeshly murdered the terminal littlle car by just flooring the motor for 13 miles while it puked out oil and coughed out rings in a huge cloud of smoke, was just stupid and dangerous.

Has the car seized up near a grassy shoulder, It could have caught the side of the road ablaze and spread, maybe burning down someones house.

All because I didn't want to pay a tow bill.

I'm nearly fifty, I should know better, I was wrong.

On a brighter note I called the tow company in my hood and they disposed of the car and gave me 175.00.

She was just a baby.