So I wanted to repaint my moped. I have a 1999 Tomos Lx. The original color is blue. Instead of repainting it blue I made it look like an army motorcycle. It took me and my dad about five days to strip it down, tape it off then prime and paint.I wanted to work on this as a father and son project.

Before I had to prime the bike I had to sand it down. I took all the paint off the motor covers since there plastic and I didn't want the paint to chip off. I wanted to put a star on the gas tank so we decided to mask off the star and paint the star.

If I were to sell it how much do you think I should sell it for or how much would you buy it for. I for sure don't want to sell it but just getting an idea about how much this is worth.

I posted some pictures of it.

The last on was the finished project. I can get more pictures.

seriously? that's how you painted it? 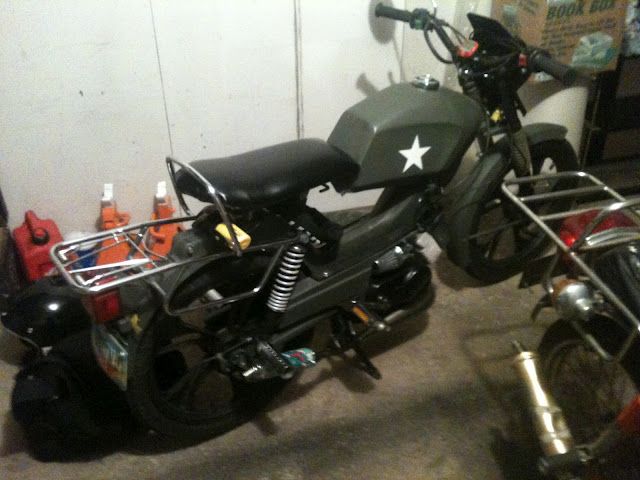 Yeah I spray painted it

It looks good bud, i ain't mad we got the same bike. You mad? I ain't mad.

If your tank/gas cap is anything like mine, the paint will probably start to fade around the gast cap. Mine doesn't really leak, i guess it's just the fumes or something.

It's a stock gas cap and it's cool that we have the same bike. Not mad at all!

Wow I just saw yours on Craigslist. I am in Columbus.

Ohio is ready for the moped war! lol

I did almost the same with mine but.. you probably did not see the post about painting it OD green, NEVER put a white star on it!

Mine is the only top tank LX iN Madison, WI and get looks and positive comments all the time. It's not 1944.