Anyone know the history of these engines? Some guy is selling one and says it came with a factory installed bike. I checked out Bumble-Bikes web site http://bumblebeebolton.com/Home.html and there is no mention of a bike, just engine kits. They say they have only been around since 1992, is that true or did they shut down at some point and reopen?

So. for the most part noone here gives the tiniest shit about crappy bolt on bicycle engines because they really have almost nothing to do with mopeds.

call it elitist. those things suck, mopeds are rad.

For real though, the bolt on 110's barely put out 4hp? That's pathetic, you can get that out of a stock moped engine with a pipe. That and they're made out of crap parts crappy material and are about the least reliable boxes of junk you can imagine.

As far as these bumble bee ones, friction drive is pretty retarded. these are ACTUALLY weedwacker engines made to drive a bicycle.

Finally, they never sold them on bikes. Maybe the one you're looking at is made by someone else, and bumble bee was the nearest thing they could find. Maybe it was sold as a kit by a 3rd party, like a bike shop that assembled and sold complete bikes.

Last point. I like solexes. get one of those.

About a year ago I put a 66cc on a mountain bike. They call them "Happy Time Motors" i think. Fast, like 40mph right now! Motor would just scream with the shitty little oem pipe. Real China crap. I got rid of it because it didn't feel safe. Most pedal bikes are not engineered to handle that kind of speed or stress esp. the tires. I felt like i didn't have control and sure as hell could not stop fast with the brakes that came on the bike. I think the reason there are no bike-included kits is liability. Mine felt like it was going to come apart at WOT.

The one I have is a chainsaw engine rebadged Bumble Bike. I bought my engine in 1982. Use a tire with smooth tread to reduce vibration

Looks like you have a plethora of mopeds, why u trifling with these little bike kits?

I have a Solex.

Supposedly these Bumble-Bike setups are decent for what they are.

It is NOT a moped. It's a crappy engine that you can put on a bicycle. Apples and oranges.

a bicycle with an engine on it is a moped

The top of my carb unscrewed while on a gravel road so it was open more than W.O.T and i crashed it from freakin out and slamming on the brakes(dumb on my part) and my whole right palm turned green and yellow and oozed bright yellow puss for two weeks, fun while they last but the shitty v-brakes had to be replaced everyday.

What do you think all the original mopeds were.

So then you are saying all the original mopeds were crap?

Here is the definition: A lightweight motorized bicycle that can be pedaled as well as driven by a low-powered gasoline engine.

It was a ride to remember! LOL

Yes all original mopeds were crap in the 70's. We make them awesome!!!!

I just scored one of these and they are rare and technically it IS a moped since it meets all the criteria for one in this case. Plus it has a tab for them in the photo gallery. A vintage ad online claims 200 mpg and 35mph max speed. It's power to weight ratio far exceeds AMF Roadmaster and Solex. 1.3 hp STOCK! I'm so stoked to get such a specimen in hardly ridden status. 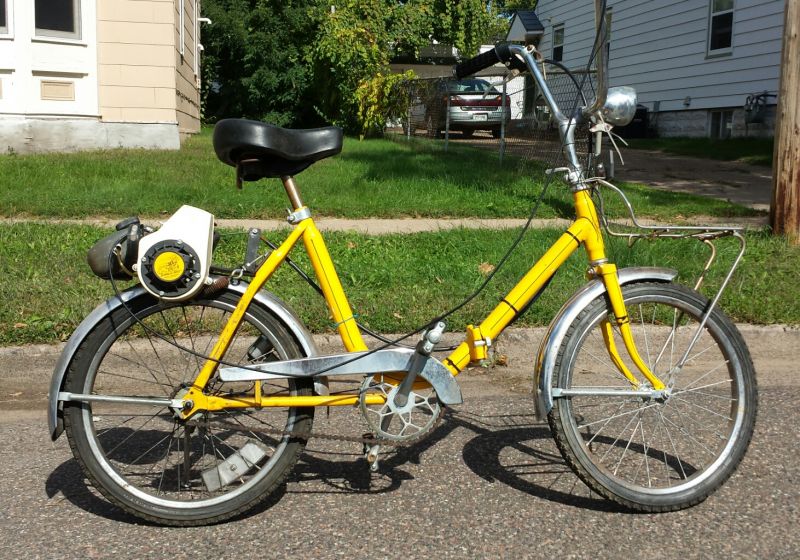 That thing is wonky. But it folds in the middle so sweet!

It upsets me that there was absolutely no effort into having the throttle cable go anywhere but up the side to get caught on everything.

Bike needs some love. Clips for cables are mia.

Does it have a DOT registered frame? No? not a moped.

I have one of these engines. You must use a fairly smooth tire or else it vibrates a lot

I had a friction drive unit once - a Japanese interpretation of the Solex, made by "Tanaka" under the brand of "Tas motor". 23cc 1HP. Went about 20-25mph with a slightly larger friction roller (pressed a rollerskate wheel over the worn-out original)

Agreed about the smooth tires, it helps.

Kind of fun, but illegal around here so I sold it to a bicycle collector.

Fast forward about 8 years later, rolling my first proper moped into the garage...

I like mine. It's a 7-speed derailleur Kawasaki bike with suspension and a guy named Scooter Dave in MI put it together really well. It will go 27mph with the smaller roller wheel and over 30 with the larger one.

My boy enjoyed riding it and came along with me on rides on country roads.

You drop the engine with a lever,it contacts the tire and you twist the throttle and yer rolling!

One thing I did,was to replace the knobby type rear tire with a heavy duty tire from WalMart. Works just great! I consider them to be just as much a moped as the Solex.

Well I haven't gotten it running yet, but I'm close. The rewind was broken and when I disassembled it I discovered that the spring was missing. A trip to my local small engine shop and I found a usable replacement which worked much better than my diy recoil spring I fashioned from a broken tape measure. Now I just need to rebuild the carb. It's a Warbro WA90 series. The lawnmower shop had that in stock as well. Here's a vintage ad I got off ebay describing the incredible Bumble bike. Solex eat my dust! 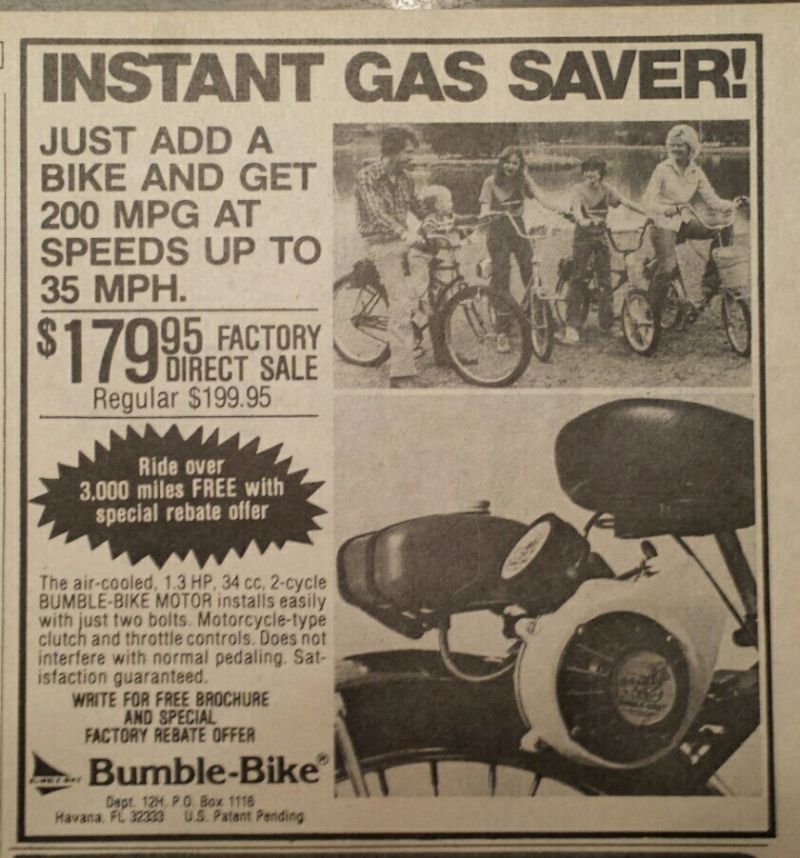 I just found out Bumble-Bike was located near Tallahassee FL.

In my market, AMF Roadmaster friction drive had the low end market share.

I have never seen a Bumble-Bike in person.

@ Lazer, cool find. I remember ads for those, I think Sears sold something similar in their catalogs/wish books, anyone remember those? Mounted on the front wheel though. Not sure 35mph would be advisable on that bike, no front brake? Make sure the folding clasp is tight! :) Have fun with it.

Here is a website that has the Sears version and a few other versions.

^Cool site, I don't think those would be legal here, but still fun to remember them, I wanted one SO bad when I was a kid, glad I waited for a moped though, real brakes! :)