I got my first moped on 8/18/11, a silver/green 1978 Puch Maxi Sport MKII with 70cc Athena kit, Atmal 15mm carb, and BiTurbo pipe. I only rode it about 6 miles before the piston and rings went out as well as a bad small end copper bushing. I took the ZA50 off and replaced it with an E50, K-Star 70cc kit, Estoril pipe, and 15mm Bing.

Picked up my second moped on 11/7/11, a brand new black 2011 Tomos ST from Action Sports in Hayward, CA. Changed the wheels for black ones and added a 22 tooth rear sprocket. Upgraded carb with a 84 Main, 30 Idle, and a new air filter. Installed a Technigas Next R pipe and replaced headlight with a bullet style. I also added an 70cc Airsal kit. Stock = 27MHP. Upgrades = 50MPH. I've gone through two pistons. Dump that oil injection if you put on a kit. I learned the hard way even though I knew better. Pre-mixing sucks but walking your bike home sucks even more! Also, prepare to go through clutches :( I replaced 1st and 2nd with the aftermarket ones from 1977 mopeds.

Picked up my third on 5/23/12, a yellow 1978 JC Penney Pinto. I completely tore this one down and powder coated the frame and tank polar white and the rack a chrome. Swingarm and other parts were coated flat black. Polished up the spoke wheels with new tubes and Hutchinson 17x2.25s, new seat, handle bars, grips, etc. This engine was rebuilt by Motomatic Mopeds with an E50, Gilardoini 70cc kit, Rito crank, 24 FS Mikuni, KN Filter, and Techno Estoril pipe. I also installed a TrickMetric Hammer v2 clutch along with the PowerDynamo 12v/100w DC CDI.

Picked up my forth on 5/31/12, another yellow 1978 JC Penney Pinto from the same guy as the other one. I used this engine for my first Maxi. The frame/tank/swingarm/forks were sold to fellow Squid Aaron.

Picked up my fifth on 8/17/12, a custom yellow 1979 Honda Hobbit with DR kit with Derbi Head, HPI, Motomatic Destroyer, 21 Dellorto PHBG carb, and upgraded TJT variator. It has awesome torque to take off and fly. This is so far my fastest bike. I got it up to 59MPH before getting scared and laying off the throttle.

Picked up my sixth on 9/2/12, a silver 1978 Vespa Grande Super Deluxe. Everything is stock. I had "Cheetahchrome" Mark re-do the wiring on this one and it is now a runner.

My seventh is a 1981 Puch Magnum and has been a work in progress as it took me several months and random people to collect all the parts seperately. This bike will be built by Motomatic Mopeds with an E50, Gilardoini 70cc kit, Rito crank, 24 FS Mikuni, KN Filter and Motomatic Destroyer pipe.

Picked up my eighth moped on 4/23/13. She's a blue 1981 Vespa Ciao PX. I've been wanting a Ciao for a while now but never found a good deal on one. This one was a very good deal. It's been sitting for 10 years. Previous owner didn't know what was wrong with it. I threw the carb back on and had it running in 15 minutes. Tank was trashed so had to use another frame. Powder coated the frame blue. Installed a Tecno Circuit pipe, 13.13. Dellorto SHA, Malossi Hi-Flow filter, Malossi Reed cases, Top Racing Crank, and 80mm pully. Has euro style headlight, taillight, and long seat. This bike is totally bouncy and fun to ride!

Didn't think I would buy another moped for a while. At least not until I thinned the heard. That didn't happen. Picked up my ninth moped, a 1980 Puch Maxi with an E50 on 10/13/13. Great deal on this one which was registered to the guy I bought it from, and it is a solid runner. Needs new tubes, tires, and some cleaning and that's about it. Only things I had to do was clean the carb and fix the wiring as it wasn't grounded. I had been looking to buy an E50 since I'm putting my spare on my Pinto build. This one will go on my Magnum build and I'll throw my ZA50 on this Maxi.

Added another one to the collection on 3/22/15. A yellow 1974 Vespa Ciao SC that Lost Boy Pony picked up in a trade. It's just a pile of parts and missing a few things that I'll need to complete the puzzle. Some of those parts I already had but still need a headlight, taillight, seat, and a better set of handlebars. Something to keep me busy with this Summer. 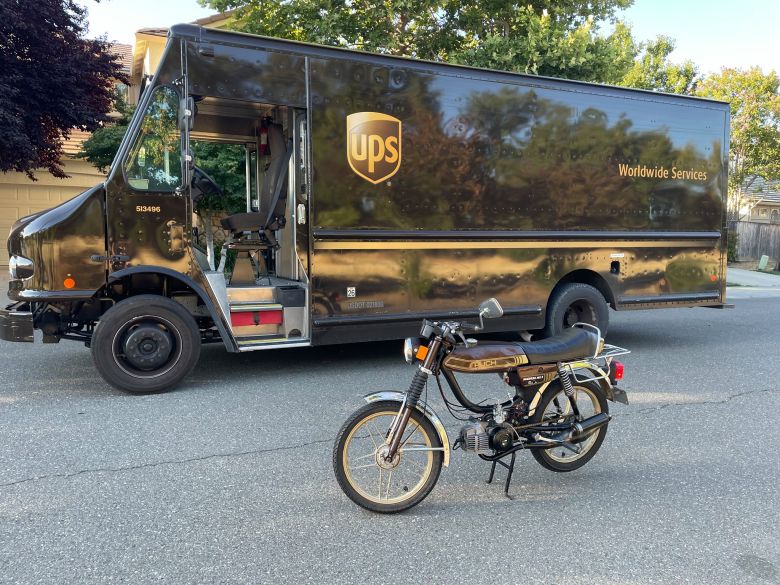