Bikes come and gone:
1979 Puch Magnum XK (Bree gave it to me as partial trade for the General, crusty and broken, I got it living again and rode around a few months, sold off to the magnificent Dylan to rebuild it into a nice bike again)
1989 Honda XL600V Transalp (bought it of Jackerz and daily-ed it for a couple years, sold to a very stoked random dude who ended up being an ex-moped person)
1979 Puch Maxi N (henshaw left it to me when he moved, threw some chopper dude tubes up front, gave to Travis)
1983.5 General 5 Star (my baby, built from ground up, 505 with Motomatic prototype adapter running stock e50 top end, kx65 San Jose special pipe, knobbies and magnum x bars, sold to Bree)
1977 Solex 4600 V3 late model (Jackerz gave it to me at a Lost Boys ride, super crusty, I cleaned it up, rebuilt the engine and then lost the motivation to do all the finishing touches, sold to Tobias)
19?? Avanti Cub 70 (Found on Craigslist Santa Cruz, told Sean mohoot to grab it, he sold it to me later and we raffled it at WhatsKraken rally 2019, where it went back to the east bay)
1980 Vespa Grande Super Deluxe (mysterious Craigslist ad with nothing but the word “Moped.” Got it running and cruised around a few times then sold to CheetahChrome.)
19?? Negrini Leprotto (rad euro bike a friend bought, sat for years, I got my hands on it and rode the heck out of it, sold to jake spangle, now in the hands of some dude who is adding a second motor and “restoring” it...)
1972 Suzuki GT 380 Sebring (really rough, cheap on Craigslist, sold to local vintage motorcycle shop that needed parts)
1990 DR 650S (free seized up mess, someone tried to convert to a bobber, lots of nice parts and goodies that were sent to good homes, the carcass was given to Levi to turn into a wicked beast)
1983 Batavus Grand Prix (50cc Doppler ripper, constantly breaking bits and pieces. Took me 3 years of pestering the guy to trade it to me. Sold to Aaron Libby.)
197? Vespa Ciao (variated! Bought from a kid in davis, got it running, sat in travis’ garage for a while, sold to a dude in LA at the bullies rally.)
1977 Puch Maxi Sport (pile of crust, gave to Travis, disappeared into the ether)
1974 KTM Foxi (wife’s bike, purple ripper with an e50, sold to Annemarie. This bike ended me up in jail!)
1974 Suzuki GT185 (bought, fixed, daily rode for a few month and sold. Rad little blaster! Now living in SF)
1988 Kawasaki KLR250 (title issues, sold it to a stoked dude from Tennessee)
1971 Moto Guzzi Trotter (bought from terry dean to keep it around because it's so cool, sold to Lost Boy Matt to keep in the family)
197? Vespa Bravo (rough lil thing, sold to cheetahchrome)
197? AMF Roadmaster (traded Alan some beer for it, Nate got it running, super janky, traded to lost boy Matt for a bravo.)
1981 Vespa Boxer (jimmy treat gave to Motomatic Nate who sold it to me who I traded it back to for work and then it ended up going back to jimmy!)
1980 Puch Newport II (twin tank maxi, frame built by Kile brekke, a friend bought it then eventually gave it to me, daily rider for 4 years, sold to Tyler brekke)
1974 Yamaha rd60 (turned out to be stolen, returned to owners, they decided to sell back to me when i had no money, so they sold it to Barry)
1977 Puch Maxi (traded feldman a project hobbit for it, came with dirt bike pipe which is now on my General, went to Taggart to replace his stolen bike, and then was also stolen!!)
197? Honda PA50 II (almost a runner, traded to feldman for a kitted maxi)
198? Yamaha riva 50 (given to me by a neighbor and I gave it to ken thomas)
1989 Honda VTR250 Interceptor (miami vice style! sold to some stoked kid after I got bored of it, sadly got painted flat black and crashed...)
197? Vespa Ciao (traded to lovely Maitland Creature)
197? Honda PA50II Hobbit (shitty pile of parts #2, traded it to jBot to build a beast from)
197? Motron Classic (literally covered in rust, but awesome, got it from Russ, traded toward batavus Grand Prix)
1978 Sears Free Spirit (full rigid fun, traded toward batavus grand prix, napa jack got it from that guy and it ended up with will with a derbi transplant all choppered out)
1963 Allstate Vespa 125 (rusted shitty scooter, sold to a friend of my brother)
1973 Vespa VBA 150 (rusted shitty scooter, sold to a friend of my brother)
1982 Honda MB5 (sold to lovely Maitland Creature, then to Cutter Nick, now Ryan Montana’s)
1976 Puch Maxi N (frame n forks, sold it and shipped it across the country)
1977 KTM Foxi GT (pile of rusty shit bike, just wanted the sweet tank rack, traded or sold off)
19?? SIS Sachs frame (scrappy, sold to mark who built a pretty rad bike out of it)
1978 Sears Free Spirit (perdy stocker, i crashed it once, sold to Nicole, then she got hit by a car on it and sold it)
1969 Sears/Gilera 124 5v (rad cafe bike, didn't know enough about motors to get it going, sold to JD before he was a squid)
1979 Puch Magnum MKII (painted SEAFOAM GREEN n PINK By mike Rafter to match my shoes. My first complete running bike. Eventually parted it out.)
198? Honda Nighthawk (awful free broken shit motorcycle, sold to some kooky old dude)
1979 Motobecane 50V (stolen from a squid, I found it and got it back but it was ruined so he let me keep it. Traded or sold it off)
1978 Honda PA50II Hobbit (shitty pile of parts, sold or traded it off)
1978 Sears Free Spirit (pile of parts, frame traded to Pappas for Jenn’s Foxi frame and was turned into a John Deere looking top tank, which tobias now has, motor and wheels went to my magnum) 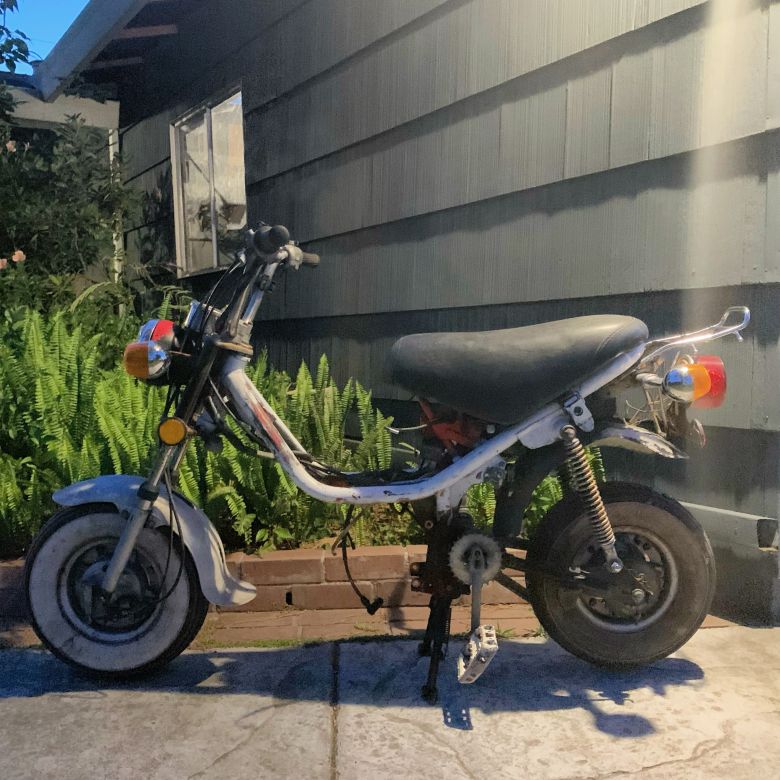